Forest fires and warming to blame for Greenland melt 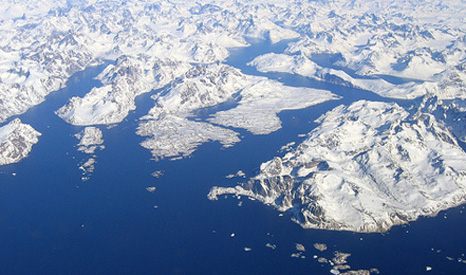 A combination of forest fires and exceptionally high temperatures were to blame for surface melt across almost the entire Greenland ice sheet two years ago, a study concluded on Monday.

In July 2012, over 97% of the snowy surface of the Greenland Ice Sheet melted, the first instance of such a widespread melt since 1889, according to the latest study, published in the Proceedings of the National Academy of Sciences, a US journal.

While melting is an annual event at the margins of the ice sheet, it is almost unprecedented in its frozen interior.

That led them to suspect an additional factor contributing to melting of the surface snow and ice, and they concluded that this a result of soot deposited on the ice as a result of distant forest fires.

Given that both Arctic temperatures and the frequency of forest fires are expected to increase in coming years as a result of climate change, the authors concluded that the ice sheet surface would melt more often in coming summers.

“In the future, warmer temperatures and more frequent Northern Hemisphere forest fires driven by climate change may increase the frequency of these widespread melt events, contributing to the further demise of the Greenland Ice Sheet.”

The authors pinned the blamed on forest fires as a result of a forensic analysis of ice cores.

The scientists concluded that soot, also called black carbon, deposited on the ice was darkening the surface of the ice sheet, in years with especially ferocious, distant forest fires.

The study could attribute the soot to forest fires because of other chemicals present, which were typical of burning wood.

The darker a surface the more light it absorbs, and so the warmer it gets. The reflectiveness of a surface is also known as its albedo.

“Exceptionally warm temperatures combined with black carbon sediments from Northern Hemisphere forest fires reduced albedo below a critical threshold in the dry snow region, and caused the melting events in both 1889 and 2012.”

The melting snow does not contribute to sea level rise, instead percolating through the snow and ice of the vast ice sheet, where it re-freezes.

Black carbon from fossil fuel combustion or forest fires can reach the top of the ice sheet and reduce the albedo by up to 7%, they said.

Only in 1889 and 2012 did the soot deposition coincide with especially warm Arctic summers.

“Our data suggest that during these two years, abnormally warm summer temperatures combined with black carbon deposited on the ice sheet to reduce albedo below a critical threshold.”

While they found it impossible to pin down a location of the fires in 1889, they found that two years ago the smoke could have originated from significant forest fires in Siberia and North America in late June and July.

Climate change models project that both temperatures and the frequency of forest fires will increase this century.

“The Arctic mean summer temperature is predicted to increase 2–9C by the end of the century, and forest fire frequency is expected to at least double per 1C rise in temperature,” the study reported.

The scientists estimated that at the top end of the range of projected warming and frequency of forest fires, the ice sheet surface would melt almost every year by the end of this century.