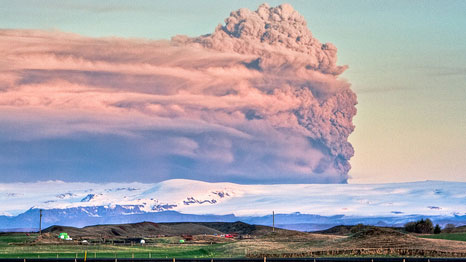 Iceland names its commercial aircraft after its volcanoes – ironic, given that ash blown into the atmosphere by the 2010 eruption of the country’s Eyjafjallajökull volcano resulted in much of Europe’s airspace being closed for days, with 100,000 flights cancelled and ten million passengers stranded.

Volcanoes are deeply embedded in the Icelandic psyche. They are everywhere in the landscape. In many ways, the whole country is a volcano.

Eruptions of one sort or another are going on all the time. The locals tend to ignore the odd rumble and giant cloud of fire and ash, which would have those of us living in less explosive regions disappearing under our beds. Reykjavik tour operators refer to these minor blasts as “tourist eruptions”.

The Laki volcanic eruption in 1783 was a very different matter, one of the most devastating in recent history, an event that has even the phlegmatic Icelanders quaking at the Earth’s explosive power.

Island on Fire, a new book by Alexandra Witze and Jeff Kanipe, details the local and global impact of Laki’s eruption. Hot ash and cinders burned skin and poisoned pastures. At least one-fifth of Iceland’s population was killed, and half the country’s livestock wiped out.

“What made Laki particularly deadly – an insidious killer – was how long its eruption went on and what poisons it spat into the atmosphere,” they write. “Over the course of eight months, Laki produced one of the largest lava flows in historic times − enough to bury Manhattan 250 metres deep.

“Over the first 12 days, it disgorged the equivalent of two Olympic swimming pools full of lava every second. Along with the lava came the gas: Laki belched out an estimated 122 million tonnes of sulphur dioxide, 15 million tonnes of fluorine, and 7 million tonnes of chlorine. It was one of the biggest atmospheric pollution events in the past 250 years.”

As with climate change-related greenhouse gases, volcanic gases and ash clouds obey no borders. Laki first started erupting in June 1783. Throughout the summer of that year, it heaved and spewed particles that spread across Europe.

“All summer, people all over the continent choked on this caustic smog … people could neither avoid nor escape the malignant haze, which manifested itself as a bluish or reddish ‘dry fog’ that smelled strongly of sulphur. It dimmed the sun and instilled panic across the continent.”

Today, we know far more about volcanic eruptions, but, as Witze and Kanipe point out, we are none the less vulnerable. The 2010 eruption of Eyjafjallajökull was relatively small in volcanic terms, yet it showed that in our “just-in-time” world, with its highly-integrated transport and trading systems, one major kink in the network can lead to chaos on a global scale.

The smog of the European summer of 1783 gave way to the worst winter in decades as Laki’s aerosols chilled the continent. Studies show a large spike in death rates in England over the period.

Often, not enough attention is paid to climatic issues in analysing the course of historic events. Witze and Kanipe say that as crops failed and famine spread in France, Laki could well have been an unseen player behind the French revolution of 1789 – in the same way that a prolonged drought in the eastern Mediterranean has, in part, driven events behind the uprising in Syria.

There is little that can be done about volcanic eruptions, but they are a lesson in what can happen when pollutants and greenhouse gases build up in the atmosphere. Witze and Kanipe estimate that, overall, millions of people around the world could have died as a result of Laki’s belching and heaving.

At the moment, although Laki is relatively quiet, Iceland’s volcanoes are becoming more active. This, say the authors, is due in part to climate change. As the country’s ice has melted, the overlying weight of ice on its volcanoes has been reduced, and the loss of ice is creating geological stresses in the crust beneath.

It’s not a question of if but when the next big blast will come.