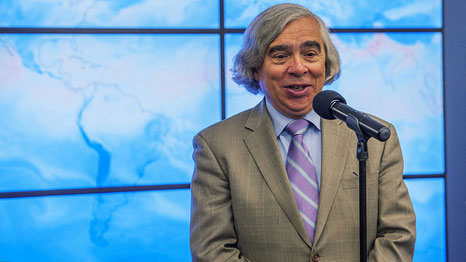 Ernest Moniz and Gina McCarthy have been instrumental in reducing US emissions so far (Pic: Sandia Labs/Flickr)

A Google+ Hangout hosted by the White House will be a chance for US energy secretary Ernest Moniz and Environment Protection Agency chief Gina McCarthy to address the biggest environmental move of Obama’s presidency so far: his plans to cut emissions from existing coal-fired power plants.

The regulations are due by the 1 June, and will be the ultimate litmus test of the success of Obama’s Climate Action Plan, in which he promised to bypass Congress to achieve the US target of reducing emissions 17% on 2005 levels by 2020.

The Hangout will take place on Monday 19 May at 1pm ET, and participants can submit questions to Moniz and McCarthy over Google+, Facebook and Twitter, using the hashtag #WHClimateChat.

“We’ll be chatting about climate change and the steps we’re taking to reduce carbon pollution, prepare for the impacts of climate change, and build a clean energy economy – including an upcoming rule that would cut carbon pollution from existing power plants,” wrote Alex Wall, the White House deputy director of online engagement, in a blog post.

The Hangout is a sign of Obama’s drive to place climate change at the top of his agenda.

During his second term, he has worked around a recalcitrant Congress to impose a number of measures to tackle global warming, including regulations for new coal-fired power plants, new fuel efficiency standards, and a US$1 billion climate resilience fund.

RTCC understands that the White House is now recruiting new staff to revamp its climate change division ahead of next year’s UN conference in Paris.

John Holdren, the director of the White House Office of Science and Technology Policy, said on Tuesday that Obama is personally committed to seeing his Climate Action Plan completed, and hopes to finalise policies before the elections in 2017.

“Clearly the president regards this as part of his legacy to really turn the country around on climate change and he aims to get that done,” Holdren said.

“I’m not terribly worried about reversal in 2017, but I do want to get done—and the president wants to get done—as much of this as possible on his watch.”