Japan, Australia urge developing countries to do more on climate 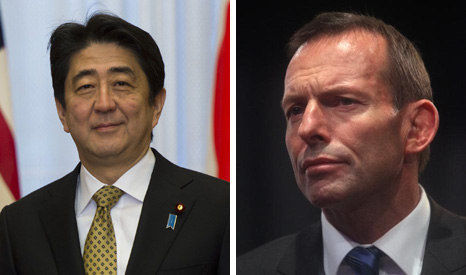 Japan and Australia urged developing countries to do more to cut carbon emissions on Wednesday, taking a hard-line stance which may reduce the chances for global coordinated action to curb greenhouse gas emissions.

The two developed countries made remarks under the UN framework convention on climate change (UNFCCC), following similar comments made by countries including the United States, Russia and China.

The UNFCCC process is presently gearing up for a climate deal meant to be agreed at the end of next year in Paris, for implementation from 2020, leading to a flurry of draft proposals.

Japan and Australia lined up with the United States and Russia, rejecting what they viewed as an out-dated split between the responsibilities of developing and developed countries in cutting emissions, as enshrined in a 1992 climate treaty.

They said that a future deal should treat all countries equally.

Australia, meanwhile, took a cautious view on its own climate action, saying that it would only support action that was compatible with economic growth.

“Australia recognises the importance of delivering global climate action that is economically responsible and promotes global economic growth,” the country said in remarks posted on the UNFCCC’s website on Wednesday.

The country reaffirmed its present target to cut greenhouse gas emissions by 5% by 2020, compared with 2000 levels, but said that any future targets would have to be in line with those offered by its “trading partners”.

“The Government has committed to review its international targets in 2015,” it said.

“It will focus on the extent to which other nations, including the major economies and Australia’s major trading partners, are taking real and comparable actions to reduce emissions.”

China is the country’s single biggest import and export market.

The battleground over how to divide climate effort between industrialised and emerging economies marred the last attempt to agree a global climate deal in Copenhagen in 2009.

Japan called for an end to the separate legal treatment of developed and developing countries, which India, China and other developing nations have insisted upon.

“All Parties should have the same international obligation to submit their intended nationally defined contribution (to carbon emissions cuts),” Japan said in its suggestions for a new climate deal, also published on the UNFCCC’s website on Wednesday.

To date, under the Kyoto Protocol, developing countries have been excused emissions reduction targets.

Australia said that many developing countries had still failed to make voluntary pledges for emissions reductions in 2020, referring to a deal which fell short of a binding agreement in Copenhagen five years ago.

“Australia notes that over 90 countries have yet to submit a pledge including 20 of the 50 largest emitters,” it said.

All developed countries – as defined in the 1992 climate treaty – have made some kind of voluntary domestic climate targets in 2020, under the Copenhagen agreement, with the exception of Turkey.

However, many developing countries have not, including some Latin American nations which complained that the Copenhagen deal was unfair, and oil exporters which stand to lose from a climate deal, such as Iran, Iraq, Libya, Nigeria, Qatar, Saudi Arabia and Venezuela. Other large countries which have not made a pledge include Egypt, Pakistan and the Philippines.

Emerging economies including China and India have called on industrialised nations to do more to cut carbon emissions, because they have grown their economies by pumping greenhouse gases into the atmosphere for over a century.

Australia’s Prime Minister, Tony Abbott, is in the process of trying to repeal the country’s carbon trading law, saying that a tax on fossil fuels would raise costs unfairly for energy consumers.

Canberra’s latest budget will see funding for climate-related projects shrink from AU$5.75 billion in the current fiscal year to $500 million by 2017-18.