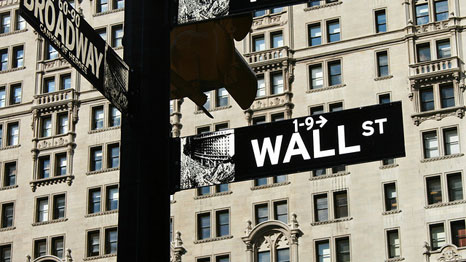 The number of investment managers offering fossil-free portfolios to clients increased by over 50% in the past year, demonstrating a growing interest in divestment among investors.

In a survey completed by 587 investment professionals, 36% indicated that they now offered investors the option to explicitly exclude the fossil fuel industry from their investments – up from 22% in 2013.

The findings show a growing trend of investors turning away from oil, coal and gas on both ethical and financial grounds. Divestment campaigners argue that such investments create a financial as well as a climate risk, as strengthening climate policies mean that unburned reserves of fuel could become stranded assets.

“In my view, the growing drumbeat of responsible investors seeking investment strategies with little or no exposure to coal, oil, and gas extraction companies will only increase as more evidence of the negative effects of climate disruption reverberate from the recent IPCC and National Climate Assessment reports, and as more analysts and investors understand the stranded asset risk equation,” said Steve Schueth, president of investment company First Affirmative, which produced the survey.

According to the survey, 76% of those questioned believed that the risk of investing in fossil fuel companies was growing, while 56% said they were concerned about the possibility of stranded assets. 9% said they had plans to introduce fossil-free portfolios options to their clients.

While this suggests that those surveyed have a pre-existing interest in ethical investment, it demonstrates that divestment from the fossil fuel industry is gaining ground as a moral issue in its own right. This suggests the tide is turning against the argument put forward by some investors that the ethical imperative is not as strong as in previous divestment campaigns, which include apartheid and the tobacco industry.

Some, including Harvard University, have refused to divest on the grounds that shareholders can have a greater impact through engaging with the fossil fuel companies in which they invest to pressure them into becoming more sustainable.

But even among the ‘responsible’ investment managers questioned, only 23% said they had participated in shareholder advocacy with fossil fuel companies on behalf of their clients, while almost 40% said they never had, and had no plans to do so in the future. 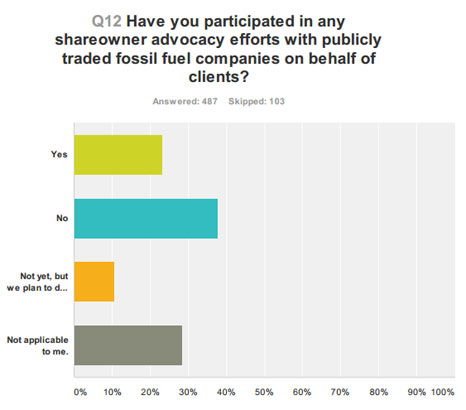 Among those who had engaged with fossil fuel companies, the most popular advocacy options were trying to persuade companies to report on plans to assess the carbon asset risk and setting quantitative goals for greenhouse gas reduction.

“If there is a hot topic around SRI office water coolers, this is it,” said Schueth. “The 2014 Fossil Fuels Divestment Survey results confirm that interest in fossil fuel free investment strategies is on the rise.”