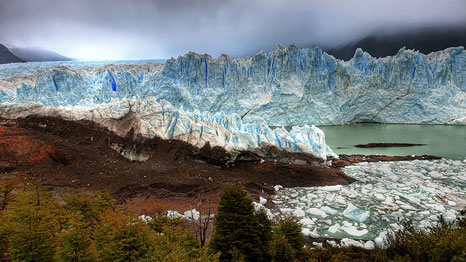 The prospective collapse of West Antarctic glaciers, reported this week, appears to meet a condition spelled out by the UN climate panel for more rapid sea level rise this century.

Sea level rise is a concern because of a global impact on the world’s coastlines, a threat even at low levels of global warming, and a lag effect which may reduce urgency to curb rising greenhouse gas emissions.

They agreed that glaciers draining into the Amundsen Sea were on the verge of irreversible collapse, even at the relatively low levels of warming seen now.

The largest, the Thwaites glacier, would contribute about 0.6 metres sea level rise, while all six would add about 1.2 metres in total.

The two studies also agreed that the glaciers additionally supported ice sheets further inland, whose accelerated slide into the sea might add a further 3 metres or so to sea levels, but they did not discuss the timescale for such an outlook.

The studies were published against the backdrop of a recent UN climate panel report which found that sea level rise had accelerated over the past few decades and posed a serious threat.

The UN Intergovernmental Panel on Climate Change (IPCC) publishes a regular update every six years or so, based on the scientific literature.

In its latest review, it said last September that the rate of ice loss from West Antarctic and northern Antarctic Peninsula glaciers and ice sheets had hugely increased in the past decade, rising to around 147 billion tonnes of ice annually in 2011 compared with 30 billion tonnes in 2002.

That supported the findings of the two studies published this week, which found that the rate of ice loss from the West Antarctic glaciers had increased steadily over the past 40 years.

The IPCC reported that sea level rise had nearly doubled, to 3.2 cm per decade since the early 1990s compared with 1.7 cm a decade over the past century. 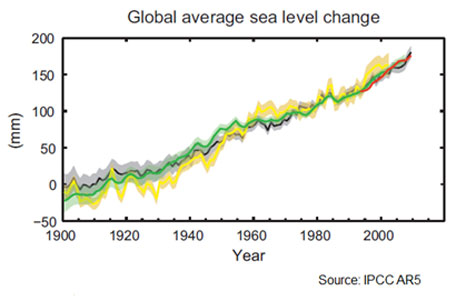 And it said that that sea level rise would accelerate this century as a result of increased ice loss and thermal expansion of the sea. It projected sea levels would rise above present levels by 0.26 to 0.98 metres by 2100.

But sea levels would rise faster this century, perhaps by several tens of centimetres, if West Antarctic glaciers collapsed, it said.

“Based on current understanding, only the collapse of marine-based sectors of the Antarctic ice sheet, if initiated, could cause global mean sea level to rise substantially above the likely range during the 21st century,” it said.

It cast doubt on such an outcome, reporting uncertainty in the scientific literature over the prospect for instability and irreversible decline of the West Antarctic glaciers and surrounding ice sheets.

The reason the West Antarctic glaciers are vulnerable is because they are all grinding along the sea bed, up to a point where they detach from the rock and rise upwards to form ice shelves on the sea surface.

As a result, they are more exposed to the sea, which is far warmer than the Antarctic air above.

“Some studies have found an acceleration of ice loss as well as enhanced basal ice-shelf melting, but the short period of observations does not allow one to either dismiss or confirm that these changes are associated with destabilization of the West Antarctic ice sheet,” the IPCC report said.

But the latest studies appeared to reject such doubts, projecting that the glaciers were now in a state of irreversible collapse.

One of the studies projected that the glaciers were on track to disappear entirely within two centuries.

“They are retreating at rates of about 1km a per year,” said Eric Rignot, from the University of California, a glaciologist at NASA’s Jet Propulsion Laboratory, and lead author of the study published in the journal Geophysical Research Letters.

“If these glaciers sustained this rate of retreat they would disappear completely in a couple of centuries,” he told reporters on Monday.

The two new studies also have implications for expected sea level rise beyond this century.

The IPCC quoted one seminal study, published last year, which estimated around 2.5 metres long-term sea level rise would occur over several thousands of years, for every degree Celsius sustained warming above pre-industrial levels.

Melting of Antarctic ice sheets would contribute about 1.6 metres of that sea level rise, estimated the study published in the US Proceedings of the National Academy of Sciences.

According to the studies published this week, however, melting of West Antarctic glaciers would contribute around 1.2 metres in the next few centuries alone, and in as little as 200 years.

That would imply much faster sea level rise and at lower temperatures, in the context of warming presently of around 0.8C above pre-industrial levels.

One uncertainty in the recent papers, however, is the exact cause for the decline of these glaciers: are they continuing a long-run decline as a result of natural factors, or is it a direct result of climate change?

Certainly, the studies multiply the doubts over sea level rise: they illustrate an urgency to pin down sea level projections, and improve our understanding of the human costs of continuing rises in greenhouse gas emissions.

There is an ample, geological precedent for substantial sea level rise which would re-write global coastlines and inundate islands, cities and coastal infrastructure.

The IPCC last September reported that in the last interglacial period of milder climate between ice ages, global sea levels were 5 to 10 metres higher than at present. That interglacial period, 116,000 to 129,000 years ago, corresponded with sustained polar temperatures at least 2C warmer than today.