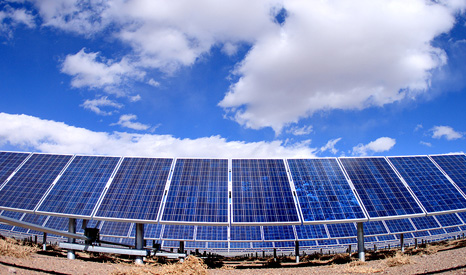 This is the finding of the latest report on the renewable energy industry from the International Renewable Energy Agency (IRENA), which was launched today in South Korea during a conference of government ministers and delegates on the future of clean energy technology.

The numbers demonstrates the substantial growth that the industry has undergone in just one year, expanding from 5.7 million in 20912, said IRENA chief Adnan Z. Amin.

“With 6.5 million people directly or indirectly employed in renewable energy, the sector is proving that it is no longer a niche, it has become a significant employer worldwide.” 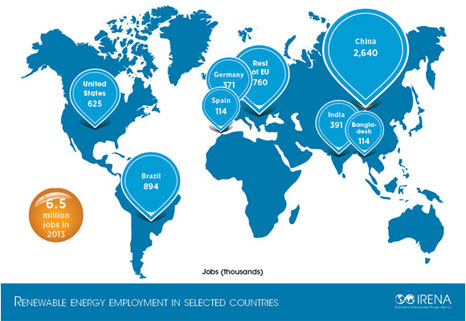 The growth comes as a result of regional shifts in the renewables market, growing competition and advances in technology and manufacturing processes during 2013, found the report.

In particular, China saw a significant increase in annual installations and manufacturing of clean technology. IRENA predicts that solar power installations rose five-fold between 2011 and 2013.

This meant China had the largest number of employees in the renewable industry, followed by Brazil, the US, India, Germany, Spain and Bangladesh.

The greatest number of these were employed by the solar industry, followed by biofuels, biomass and biogas. 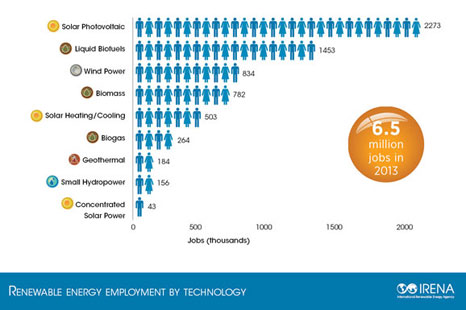 Speaking to the Independent last week, UN climate chief Christiana Figueres said that climate change offered a “huge business opportunity” that ought to be embraced by both sides of politics.

“Addressing climate change in a timely and effective fashion actually means a huge new side of industry will be created that is going to bring jobs and income,” she said.

“So it’s not necessarily a typical left-wing agenda, it actually has opportunities for everyone.”

A successful UN climate deal in 2015 will require the world to rethink how to produce its energy and make a mass transition towards low-carbon alternatives to fossil fuels.