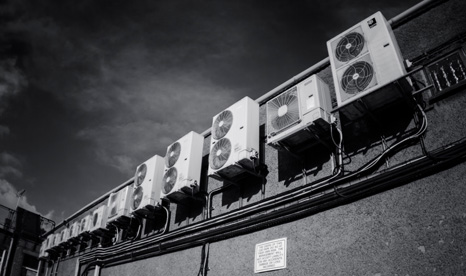 A fresh initiative to cut the use of potent climate warming gases used in fridges and air conditioning units will be launched at a UN climate summit in Abu Dhabi this weekend.

A coalition of countries and leading multinationals will present plans to phase out the hydrofluorocarbons (HFCs), gases with warming potentials thousands of times stronger than carbon dioxide.

If left unchecked, the UN-backed Climate and Clean Air Coalition (CACC), which is supported by over 30 countries, says HFCs could account for 19% of carbon dioxide (CO2) emissions by 2050.

“Fast action to address HFCs would also catalyze gains in energy efficiency in refrigeration and air conditioning systems, thereby greatly reducing electricity use and carbon dioxide emissions, along with emissions of the HFCs themselves,” says the CACC’s submission ahead of the Abu Dhabi meeting.

The CACC, which counts the US, UK and France as members, together with industry representatives from the Coca Cola, Red Bull and Unilever-backed Refrigerants, Naturally! group are set to address delegates in an hour-long session on Sunday.

UN organisers are billing it as an opportunity to prepare areas where countries and business can find clear agreement, ahead of the Secretary General’s high-level meeting in New York this September.

“The Abu Dhabi Ascent will play a pivotal role in mobilising action that will allow us to address climate change,” Ban said in a statement this week.

Other key issue areas up for discussion include climate finance flows, the role of cities in slashing carbon pollution and how to scale up global energy efficiency efforts.

Last year the US and China, together with members of the G20, agreed to explore the technical and economic alternatives to HFC use.

But while there is widespread agreement that HFC use needs to be slashed, a powerful constituency of countries including India, Saudi Arabia, Kuwait and Brazil oppose radical policies to cut their use.

A key barrier to using other forms of coolants is the lack of available financing for developing countries and the potential affects on their domestic industries, factors India and Brazil have raised recently.

In addition, Middle East countries rely heavily on air conditioning units on a daily basis, and envoys say HFC alternatives may not be able to cope with ambient temperatures all year round.

The CACC presentations are likely to argue that alternatives can cope in extreme temperatures experienced in the Middle East, and that non-HFC based refrigeration systems are more efficient and will save money.

“Depending on the alternatives selected and the type of refrigeration system concerned, energy savings can be realized in the range of 15% up to 30%,” the CACC submission says.

Most countries involved in HFC talks appear to want the UN’s Montreal Protocol ozone-protection treaty to take full responsibility for eliminating the use of HFCs, in the same way as it successfully monitored the end of CFCs, which were also used in aerosols, fridges and air conditioners.

So far this has not happened, largely due to opposition from the Indian government, which says all talks regulating their use should be under the UN’s climate convention.

This stance may change with the arrival a new government in Delhi, says Durwood Zaelke, President of the Washington-based NGO Institute for Governance & Sustainable Development and a veteran observer of HFC talks.

He told RTCC he was confident India could mollify its previously tough stance on HFCs, provided it received adequate assurances,

“There’s a calculation by the Lawrence-Berkley Laboratory that if India invested in super efficient air conditioning, they could avoid building 120 medium sized power plants by 2030,” he said.

“This would be a great opportunity for India to reduce its foreign currency exchange where they spend all their money importing fossil fuels.”