US rollout of electric charging stations slowing down 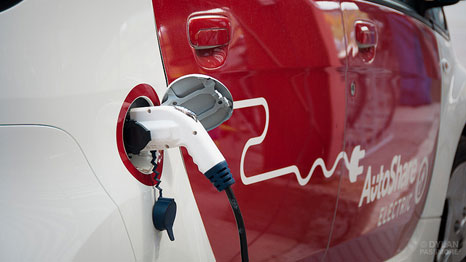 That reversed a previous trend of year on year rises in the installation of electric chargers. The data also showed continuing falls in the distribution of hydrogen and higher blends of ethanol and biodiesel.

The data did not provide the dates that filling stations opened, in the case of liquefied propane gas (LPG), which were therefore excluded from this analysis. In addition, there were missing values for the opening dates for about half of the electric charging stations, but the scale of the decline last year appeared robust nevertheless.

That slowdown will be a concern for the electric vehicle industry, given that poor charging infrastructure is cited by drivers as a top reason for not buying an electric car.

Such concerns include the short distance that electric vehicles can typically travel on a single charge, and the fear that their batteries may therefore go flat mid-journey, also called range anxiety.

The continuously updated data are provided by the US Department of Energy.

They provide information on the distribution of dispensers for seven types of alternative fuels: biodiesel (20% blends and above); compressed natural gas (CNG); E85 (85% blend of ethanol with gasoline); electricity; hydrogen; LNG; and LPG.

The data were largely for public dispensers but also included pumps available exclusively for fleet operators.

By far the biggest source of alternative fuel was electric chargers, by number of stations. 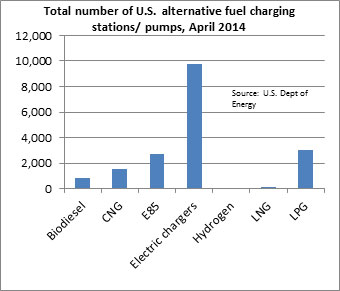 That compares with more than 121,000 gasoline filling stations in the United States, according to 2014 US Census Bureau data.

The biggest decline last year was in electric charging stations, where opening dates were available, although all categories fell with the exception of LNG. 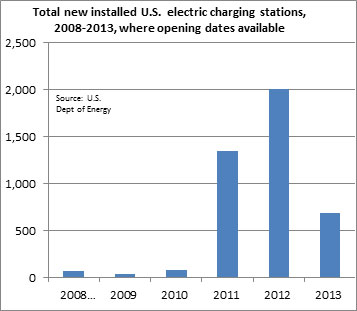 The number of new LNG stations last year nearly doubled to 27 new installations, from 16 in 2012. That growth reflects rapidly falling prices for US natural gas in the last few years, following a ramp up in domestic fracking. 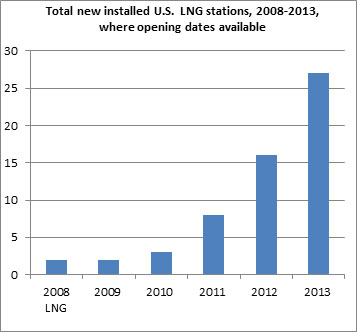