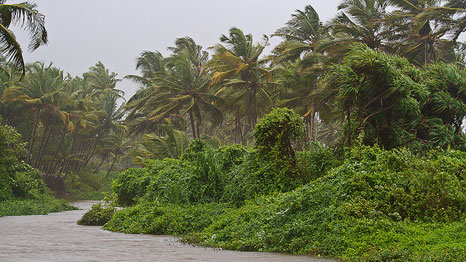 The team’s findings matched stories told by Indian farmers in recent decades, they said, of heavier rainfall earlier in the monsoon season, and longer dry spells.

“Taken together, our analyses indicate a shift in the recent period towards more intense wet spells and more frequent but less intense dry spells,” reported the article, published in the journal Nature Climate Change.

The South Asian summer monsoon is an annual wind-driven weather pattern that is responsible for 85% of India’s annual precipitation and is vital for the country’s agricultural sector. The rainfall it brings directly affects the lives of more than a sixth of the world’s population.

The monsoon typically starts in southern India in June and moves across the subcontinent. By mid-July, it is established over the entire subcontinent.

The distribution of rainfall during the monsoon season can be as critical as the total precipitation. For example, too many dry days during important crop growth stages can reduce yields or lead to crop failure, while short periods of very heavy rainfall can cause fatal flooding, killing thousands of people, as in Mumbai in 2005.

“Given the heavy dependence of agriculture on rainfall and the acute human vulnerability to flood events, the increases in dry spell frequency and wet spell intensity identified in our results represent increasing climate-related risks in the Indian subcontinent,” the report authors said.

The Stanford University team used advanced statistical methods to identify the monsoon changes, using rainfall data gathered by the Indian Meteorological Department and other sources over a 60-year period from 1950-2010.

The next step in research was to find a cause for the observed changes, whether manmade climate change, atmospheric pollution, natural variability, or a combination of these.

“Improved understanding of the root causes of the identified trends is essential for formulating effective strategies for managing the evolving risks of extreme wet and dry events,” they said.

It is more difficult to forecast changes in rainfall, as a result of rising manmade greenhouse gas emissions, compared with changes in temperature.

Scientists blame greenhouse gas emissions for most of the observed warming since the middle of the last century.

The relationship between rising temperatures and rainfall is more complex, and is based on an observed, higher atmospheric humidity as the air warms.