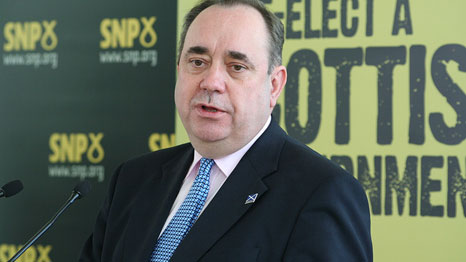 Scotland wants to set an example to other countries in moving towards a low carbon economy, says the country’s first minister, Alex Salmond.

Outlining his plans to become a hub for renewable and low carbon technology, Salmond promised the country would generate 100% of its electricity from renewable energy sources by 2020, adding the government would also pioneer carbon capture technology on its gas power stations.

Strict targets for reducing the country’s emissions would have a positive impact on the country’s economy as well as helping to tackle climate change, he said.

“They provide certainty for business and investors. They contribute to Scotland becoming a hub for low carbon innovation.”

The First Minister did not explain how this vision fitted in with plans to boost oil and gas production in the North Sea.

A recent UK government-commissioned study indicated that three to four billion barrels of oil and gas could be extracted in the region over the next 20 years, worth £200 billion.

In September, a referendum will decide whether Scotland should become an independent country. Salmond is leading the push to separate the country from the rest of the UK.

Flanked by a Scottish flag as he spoke via video link to a conference by the Climate Group yesterday, Salmond said that Scotland would continue to take a leading role on climate change, calling it an “overwhelming moral imperative”.

Ed Davey, the UK’s Secretary of State for Energy and Climate Change, also emphasised the economic benefits of tackling climate change, and called on business to demand tough action from politicians.

“You, the business community, are the engine of growth in our global society,” he said. “It is much easier for us to do our job as politicians to come to a reasonable and workable solution if those who create wealth, provide jobs and drive innovation are also demanding bold action.”

He added that the absence of an international deal on climate change, which will determine the global direction on reducing emissions over coming change, created an atmosphere of uncertainty which created challenges for businesses.

The UN hopes to sign off a climate treaty in 2015 in Paris, designed to keep the world below 2C.

Also speaking at the event, Richard Kinley, the deputy executive of the UN’s climate body, said the involvement of business in creating a climate agreement was critical.

“Climate change is creeping more and more into boardrooms, more into balance sheets. Investors are beginning to look at the concept of stranded assets,” he said, urging businesspeople to translate this into “vocal and visible support” for a new deal.