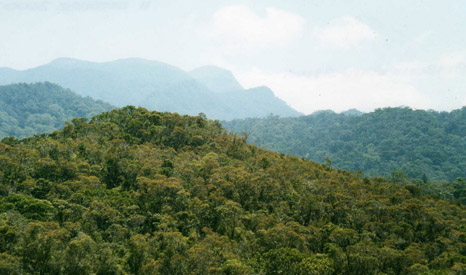 Tropical forests in central Africa are turning browner, pointing to a water shortage and higher surface temperatures, concluded a study published in the journal Nature.

The publication of the study follows a major UN report which last month found evidence for forest decline across climate zones globally, in a trend which may worsen under climate change.

Wednesday’s study used satellite data over the last 10 years to show a “large-scale browning” in the Congolese forest.

The study was based on a measure of colour which is linked with plant growth and leaf size.

The observed browning closely matched a drop in rainfall observed in the same area since the 1950s, and especially in the last decade.

“Multiple lines of evidence indicate that this large-scale vegetation browning, or loss of photosynthetic capacity, may be partially attributable to the long-term drying trend,” the authors said.

That chronic water stress differed from isolated mega droughts, for example as seen in the Amazon in 2005 and 2010.

“The persistent browning of the Congolese forests might reflect a slow adjustment to the long-term drying trend, rather than a response to episodic events such as the Amazon droughts.”

Tropical forests are important as global centres of biodiversity, as large stores of CO2, and for their influence on the wider global rainfall patterns and climate.

One concern is that a changing species composition may change forest habitats, threatening tropical forest species including charismatic species such as the mountain gorilla and forest elephant.

“Our results suggest that a continued gradual decline of photosynthetic capacity and moisture content driven by the persistent drying trend could alter the composition and structure of the Congolese forest to favour the spread of drought tolerant species,” the authors of the latest study said.

Another risk is that a decline in forests may release large amounts of CO2, further fuelling a global climate change trend.

The scientists used a measure if forest colour which they called the enhanced vegetation index (EVI), which records photosynthetic capacity, or ‘greenness’.

They also measured the water in plant matter above ground level, which would show an increase in leaf fall, for example. This measure was called the vegetation optical depth (VOD).

They found that both declined, in tandem with rising temperatures and a drop in rainfall.

The latest study reflects a growing concern for the creeping impacts on tropical forests of more frequent droughts, rather than a total tropical forest dieback whose probability is now considered less likely in the near term.

Last month’s report by the Intergovernmental Panel on Climate Change (IPCC) found that tropical forests may see shifts in tree species composition, ecosystems and biodiversity as they became drier.

A comprehensive analysis in 2010 of tropical forests across 10 countries, cited by the IPCC, examined the biodiversity implications of more frequent drought in the Amazon rainforest, Borneo and elsewhere.

They reported that droughts killed larger, less dense trees first, risking wider changes to the biodiversity of the forest.

“The rich ecology of tropical forests is intimately tied to their moisture status,” the authors of that 2010 study said.

“Amazon drought kills selectively and therefore may also alter species composition, pointing to potential consequences of future drought events on the biodiversity in the Amazon region.”

A climate and vegetation analysis of the dry forests of India in 2011, also cited by the IPCC last month, concluded that much of this forest would undergo fundamental vegetation change this century.

“According to the model projections, 39% of forest grids are likely to undergo vegetation type change under the A2 scenario (of continuously rising carbon emissions through 2050) by the end of this century,” the authors of that 2011 study said.