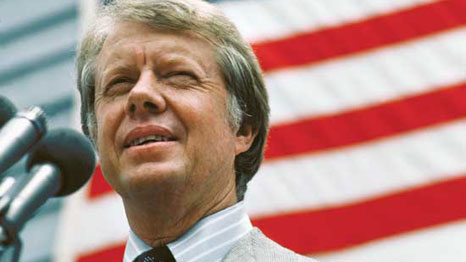 Jimmy Carter is the 39th President of the US

Jimmy Carter has criticised the Koch brothers for distorting the climate change debate through multi-million dollar donations to sceptic organisations.

Speaking in Paris yesterday, the former US president said that there was an “unpleasantly successful” campaign to undermine the science on global warming.

This is backed by the donations of the country’s wealthiest, he said, including the fossil fuel magnate Koch brothers, whose net worth was recently valued at over US$ 100billion.

“The Koch brothers are pouring hundreds of millions of dollars into every political campaign to support candidates that will support their position,” said Carter.

According to figures collected by Greenpeace, the Koch brothers donated over US$ 67million to think-tanks and organisations working on anti-climate agendas between 1997 and 2011.

This included $55,000 to the Heartland Institute and $5,760,781 to the Americans for Prosperity Foundation, through which they persuaded over 400 politicians to pledge to resist climate change legislation.

A recent decision by the US Supreme Court to remove caps on the amount of money that individuals can funnel to political candidates and parties means that such activities are now “uncontrollable”, said Carter.

He said that the Court’s 2 April ruling, which removed a US$ 46,200 cap on the overall donations an individual may make to candidates, was “unfortunate”.

The decision followed from another 2010 ruling to remove the cap on electoral spending by corporations. In both cases, the cap was removed on the grounds that it violated the First Amendment’s right to free speech.

Carter said that the Supreme Court’s rulings had resulted in some “very successful” campaigns to undermine the science of climate change, and that the vast amount of money available had enabled vested interests to influence both politicians and the general public.

“The struggle for the hearts and minds of the general public, especially young people, is intense and is going on today, sometimes without their knowledge,” he said.

He added that globally there is “a tremendous struggle for the attention of the leaders who are now serving as presidents and prime ministers.”

Carter, who was speaking to an audience of young people at French University Sciences Po, outlined steps that should be taken to advance action on climate change, including a carbon tax and more cooperation between the US and China, whose combined leadership would encourage other countries to follow, he said.

The soaring price of oil as a result of the 1979 energy crisis, which hit during Carter’s time in office, demonstrated that shifting the focus towards efficiency and renewables could be “one of the best economic boons to the world that we’ve ever seen”.

He pointed out that during his administration, the US saw the highest number of jobs created since the Second World War, thanks to the focus on new clean energy technology.

Carter recently weighed in on the most controversial energy topic of the Obama administration: the Keystone XL pipeline. He is the first former president to oppose the project, which would pump oil from Canadian tar sands down to the US Gulf Coast.

He also supported the development of nuclear power, provided it was only used for peaceful means, adding that climate change itself would likely lead to the escalation of violence and conflict in the future.

“Don’t let the false debate being put forward by fossil fuel companies deter you from enthusiastic endorsement of this crusade,” he said. “Realise it’s not an economic sacrifice but an economic boon to every country on earth.”