US military told to boost renewables in energy policy overhaul 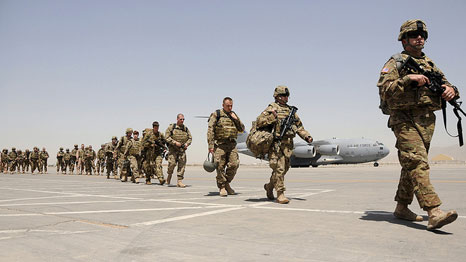 The US Department of Defense must use more renewable energy and increase the energy efficiency of its weapons and other equipment.

The directive, issued last week, formalises a more consistent approach to energy policy across the whole Department of Defense.

It instructs officials to “Diversify and expand energy supplies and sources, including renewable energy sources and alternative fuels” and ensure that energy is considered in all DoD planning and budgeting.

All personnel must be trained to consider energy a “mission essential resource”.

The 2007 National Defense Authorization Act requires the DoD to produce or procure 25% of all energy from renewable sources by 2025.

The purpose of the energy policy overhaul is to enhance military capability, improve energy security and reduce costs, said Deputy Secretary of Defense Ash Carter, when he initiated the review in June 2013.

He acknowledged the necessity of a secure energy supply in an official document, writing: “Energy is a critical capability, resource, and vulnerability across the full range of military operations, including homeland defense, defense support of civil authorities, humanitarian assistance and disaster relief, and other contingency operations.”

The Department of Defense is the largest single user of energy in the US. In 2013, it spent an estimated US$ 19billion on fuel and electricity.

The Department has already started to invest in new technology that will help it to confront these challenges. In 2012, energy efficiency and renewable energy improvements, such as the use of tactical solar gear in Afghanistan, saved around 20 million gallons of fuel.

By 2025, it is predicted that private-sector investments on DoD innovations will be generating around 3,000 megawatts of electricity, or enough to power 750,000 homes.

Last month, a quadrennial review of the US military by the Pentagon said that climate change was becoming a threat to security, as it placed increasing pressure on the world’s natural resources, creating the potential for tension and competition.

Fred Krupp, the president of the Environmental Defense Fund campaign group, said that he applauded the Department on its new energy strategy.

He said: “The services have taken significant steps to conserve energy and reduce their environmental footprints. The new policy provides a framework to continue their efforts.”