Cowboys and Indians unite on Capitol Hill in Keystone protest 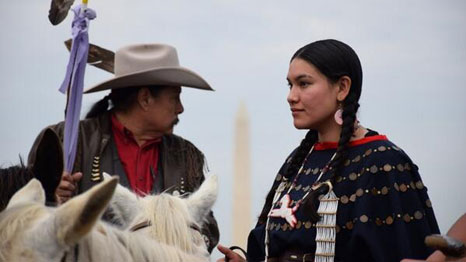 Cowboys and Indians united today in protest against the proposed Keystone XL Pipeline, leading to some rather peculiar sites on Washington’s Capitol Hill.

The 40-person ceremonial ride was made up of indigenous leaders and ranchers who live along the proposed route of the controversial $5.2 billion pipeline, which would ship oil from Canada to the Gulf coast.

A sea of feathered headgear and spangled footwear rolled down from the Capitol in to the National Mall towards a ceremonial encampment of 30 tipis, as protesters from Nebraska, Minnesota and the Dakotas sought to convince President Obama to sound the death knell for the Keystone XL Pipeline project.

#RejectAndProtect has the best footwear of any #NoKXL demonstration I’ve been too. pic.twitter.com/5Ex2lObJhP

“We are the people who have been here the longest and know the land best.” #RejectAndProtect #NoKXL pic.twitter.com/HVauctcInv

The march was the first instalment of a week-long protest by the Cowboy Indian Alliance, who say that the pipeline will negatively impact their land and water supply, as well as exacerbate the problem of climate change, as it pumps around 35 million gallons of oil a day from the Canadian tar sands down to the US Gulf Coast.

The actions will continue all week, including traditional water ceremonies, an unspecified act of civil disobedience, and a “traditional ceremony praying that the Secretary [John Kerry] listen to his conscience and the science and reject Keystone XL,” according to the schedule. A march on Saturday is expected to attract around 5,000 participants.

Faith Spotted Eagle from the Yankton Sioux said: “We are writing a new history by standing on common ground by preventing the black snake of Keystone XL from risking our land and water. We have thousands of Native sacred sites that will be affected adversely.”

The five-year saga over whether or not President Obama should approve the Keystone Pipeline now looks set to continue beyond the 2014 midterm elections, with the State Department announcing yet another delay to the final decision last week due to an ongoing lawsuit in Nebraska.

Bill McKibben, founder of campaign group 350.org, said: “It was native people and Nebraska ranchers that really started this battle, and so it’s so fitting that they’re the ones leading this last appeal to the president to do the right thing.

“We’ve gone wrong in this country before when we didn’t listen to its original inhabitants; let’s hope Keystone becomes the opportunity to show we’re wising up.”

.@Yahktoe has got the most important job at the march: Manure Manager. pic.twitter.com/TNFLZGnI5W

There should be a monument built for all these pipeline fighters. #RejectAndProtect #NoKXL pic.twitter.com/1L1yPjMreu