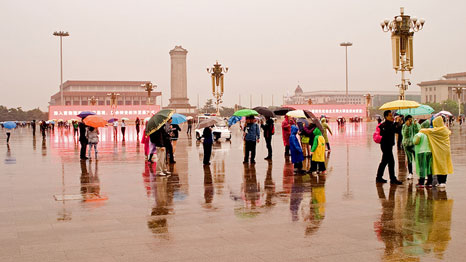 China is struggling to meet its domestic targets on emissions reductions, according to the country’s top economic official.

Xu Shaoshi, head of the National Development and Reform Commission (NDRC), said that the focus on growth was still undermining attempts to cut CO2 emissions across the country, according to state media service Xinhua.

China took over from the US as the world’s largest emitter of greenhouse gases in 2007, and has seen its emissions climb steadily ever since.

“Some areas and departments have paid inadequate attention to the issue, and the development pattern is still extensive rather than intensive,” he said in a report to the National People’s Congress, the Chinese legislature.

Decades of pursuing an economic growth-at-all-costs model has led to widespread environmental degradation across China, with chronic air quality problems in particular sparking anger among the public.

While the government has started moving towards a more balanced approach between economic growth and environmental conservation, Xu stressed that there needs to be a “stronger policy mechanism” if China is to achieve its goals.

Yesterday, amendments to China’s 1989 environmental protection law were submitted for consideration by the country’s parliament.

The amendments, the product of three years of research by China’s Environment and Resources Protection Committee, are expected to pass later this year.

The new rules will mean harsher punishments for polluters, and will give legal backing to the country’s attempts to protect the environment and reduce its emissions.

“(Upholding) environmental protection as the fundamental principle is a huge change, and emphasises that the environment is a priority,” Cao Mingde, a law professor from the China University of Political Science and Law, who was involved in the drafting process, told the Reuters news agency.

China has also been experimenting with emissions trading schemes, which it has implemented across seven regions, in preparation for the roll-out of a national scheme, similar to the European Union’s own beleaguered programme.

The latest scheme, launched in Hubei on 2 April, has so far been a success. Reuters reports that it has attracted far more investors than rival schemes, which are operating in Beijing, Tianjin, Shanghai, Guangdong and Shenzhen.

The low starting price of the carbon permits have attracted investors to China’s newest carbon market, in expectation of a steep rise in prices to follow.

In the first 12 days of trading, 1.6 million permits were exchanged, compared to just 66,000 permits sold over the same period on China’s five other markets. The seventh and final market will launch in Chongqing next month.

EU Climate Commissioner Connie Hedegaard, who will begin a visit to China this week, wrote in the China Daily newspaper that China and Europe needed to work together to tackle climate change, and in particular to ensure an effective UN climate treaty in Paris next year.

In 2012, China’s per capita emissions grew to almost equal Europe’s, averaging 7.2 and 7.5 tonnes per capita respectively.

“We are at a point where all countries must act, in line with their respective capabilities and responsibilities. China and the EU can prove to the world that green growth is not just a vague utopian vision…

“No one wants China or any other country to stop growing. On the contrary, green growth is about maintaining and improving our quality of life while ensuring pollution does not undermine economic growth.”