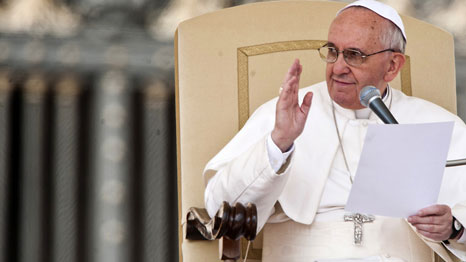 Pope Francis has been urged to back a campaign to persuade investors to remove their funds from fossil fuels.

Religious groups from Australia and the US wrote a letter to the Pope saying that divestment was a matter of integrity, and that his support would provide a “desperately needed influence on the direction humanity takes from here.”

The movement is already gaining steam, as campaigners highlight the financial and moral risks of continuing to invest in fossil fuels.

As well as being the main driver of climate change, investors could end up creating a ‘carbon bubble’, as they pour money into assets that policy could eventually demand be left in the ground.

Multi-faith groups told Pope Francis that his vocal support could influence other institutions to also pull their money away from the fossil fuel industry and stain the reputations of such companies.

“To notify the funds why the investment is being removed will be salutary. To make public such divestment is not necessary, but it would be prophetic and would enhance the impact of such decisions, and support others in doing so,” they wrote.

The letter says that 80% of fossil fuels must stay in the ground if the world is to avoid dangerous levels of climate change over the coming decades. It cautions that, despite this, fossil fuel companies are still exploring for new reserves to burn.

The Intergovernmental Panel on Climate Change has warned that the world has a finite ‘carbon budget’ of one trillion tonnes of CO2 if the world is to have a good chance of staying below 2C. Over half of this has already been emitted, with rates of emissions continuing to rise.

The movement has already won over a number of religious institutions, including the Quakers in the UK and a range of churches across the US.