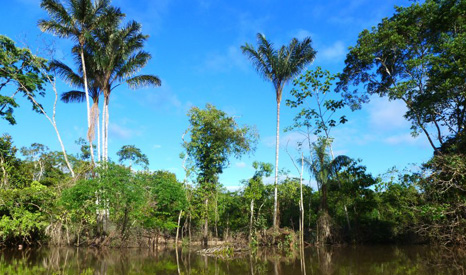 Protecting the Amazon is central to addressing climate change – around 15% of emissions come from deforestation (Pic: Global Water Forum)

The Peruvian President of the UN’s main climate change summit in Lima later this year hopes progress will be made on smaller ‘cross cutting issues’ during the two week gathering.

Manuel Pulgar Vidal, Peru’s Environment Minister, says he wants to focus on topics that countries are keen to work on together, like adaptating to climate impacts and reducing deforestation.

“We need innovative ways to unblock discussion and get the process to move,” he told a meeting of climate experts at Brown University, Rhode Island.

“We can’t continue on same discussion where we think like players and no cross cutting … That’s the only way we can move forward, on smaller issues like REDD (Reducing Emissions from Deforestation and Forest Degradation) and adaptation.”

He also cautioned against viewing the upcoming Lima meeting and next year’s gathering in Paris as the culmination of climate action, saying it was just the start of larger efforts to cut climate warming gases.

The Lima summit, known as the 20th Conference of the Parties (COP), is expected to lay the final groundwork before a global emissions reduction treaty is signed in Paris next year.

.@CFigueres to #BrownCC: “If we do not have a strong draft in Lima then we stand very little chance of having a meaningful agrmnt in Paris”

Climate envoys have been tasked with presenting a draft negotiating text to the COP before it starts in November, outlining how the deal could work, and the level of carbon cuts required.

Heads of state will also feed into this process during a specially convened gathering on the sidelines of the UN General Assembly, hosted by Ban Ki-moon.

But clear divisions still remain between some developed and developing countries, notably over the level of financial support being offered to poorer parts of the world to invest in clean energy.

In 2010, countries agreed that $100 billion a year by 2020 was needed to fund low carbon projects in these regions, but progress towards this total has been slow.

The UN’s Green Climate Fund, scheduled to be operational later this year, is supposed to lubricate the flow of cash, but Pulgar Vidal said a successful launch would not necessarily silence funding rows.

“How much does the capitalisation of the GCF this year solve the debate? Not much. But it will provide a political signal and moment for discussion,” he said.

He added discussions in Lima would focus on how much responsibility various countries had in addressing climate change, but stressed the ultimate goal was “obligation for all”.

Speaking at the same event Luis Alfonso De Alba, Mexico’s former special representative on climate change and a key figure at the 2010 UN summit in Cancun, warned the legal nature of the 2015 agreement could yet derail the talks.

Tough targets under international law could “lower the ambition” of the final deal, he said, alluding to the US, which seems unlikely to accept any binding carbon restrictions.

Instead he said the Peru talks should focus on securing “obligations by groups of countries” such as the EU or G77, avoiding lengthy discussion over what the ‘legal form’ of a deal could be.

“Something that is often forgotten is that the majority at the UN is usually silent,” he said. “Those that are noisy are often the ones who are pushing back on the agenda.”