WMO: El Nino could cause ‘dramatic rise’ in temperatures 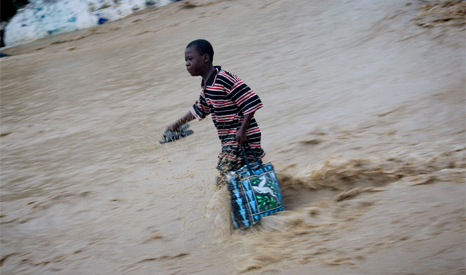 El Niño greatly reduced 1997-98 crop yields throughout the Carribbean, which was hit at the end of ’98 by Hurricane Georges

There are growing signs the weather phenomenon known as El Niño could develop this year, causing global temperatures to soar, the UN’s World Meteorological Organisation has warned.

El Niño is one of the most potent weather events on the plant, affecting the Americas, Australia and Africa.

Its signature is unusually warm ocean surface temperatures in the central and eastern tropical Pacific.

The opposite of the La Niña phenomenon, which is associated with cooling, it has a significant impact on climate in many parts of the world and has a warming influence across the planet.

“El Niño has an important warming effect on global average temperatures, as we saw during the strong El Niño in 1998” said WMO Secretary-General Michel Jarraud.

“Only two out of the past 15 years were categorized as El Niño years, and yet all were warmer than average.

“The combination of natural warming from any El Niño event and human-induced warming from greenhouse gases has the potential to cause dramatic rise in global mean temperature.”

A study published last October in the journal Nature suggested scientists are increasingly certain global warming is having an effect on the El Nino-Southern Oscillation (ENSO).

They said droughts around the western Pacific Ocean and rainfall increases in the central and eastern equatorial Pacific driven by El Nino will be more intense as a result – perhaps as soon as 2050.

Another piece of research, published in the journal Nature Climate Change in January 2014 said extreme El Nino events could double in frequency to once a decade without curbs in greenhouse gas emissions.