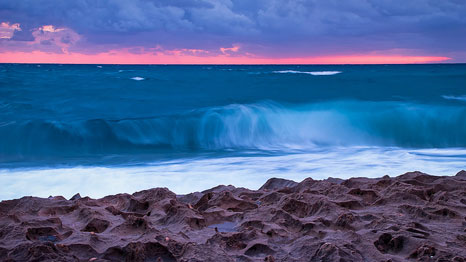 A cooler phase in a natural Atlantic Ocean cycle has helped offset warming caused by rising greenhouse gas emissions, a US study found on Tuesday.

This helps to explain slower warming of surface temperatures in the northern hemisphere in the past decade. The natural ocean cycle, sometimes called the Atlantic Multidecadal Oscillation (AMO), has been studied since the 1980s.

The paper, published on Tuesday in the journal Geophysical Research Letters, estimated the impact of the AMO, after accounting for other influences on northern hemisphere temperature including natural factors such as the sun and volcanoes, and manmade factors including air pollution and carbon emissions.

These other factors were termed “forcings”, to distinguish them as additional influences on northern hemisphere surface temperature besides the AMO.

In addition, they found that the AMO was presently in a cooler phase, after removing the influence of the outside factors, or forcings.

“A positive peak is now observed during the 1990s, with a subsequent decline through to the present,” said the authors, from the Department of Meteorology and Earth and Environmental Systems Institute, Pennsylvania State University.

“That decline is associated with the much-discussed deficit of observed vs. model-predicted warming over the past decade. It is thus reasonable to infer that the real AMO has played at least a modest role in that deficit.

“To the extent that the AMO is an oscillatory mode, it is furthermore reasonable to assume that this cooling effect is fleeting, and that the AMO is likely to instead add to anthropogenic warming in the decades ahead.”