Scientists say public must stop eating so much meat and dairy produce, citing rising levels of carbon pollution from industry 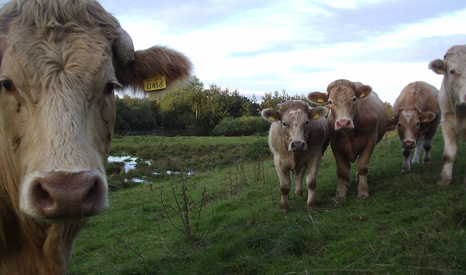 Do you want to save the world from catastrophic climate change?

One thing you can do, right now, is stop eating meat and dairy products.

That’s a conclusion from scientists in a paper published in the Climatic Change journal, which assesses the growth of greenhouse gas emissions from the farming sector.

They say nitrous oxide from fields and methane from livestock are projected to rise from 7.1 gigatonnes of CO2 equivalent (CO2e) in 2000 to 13GTCO2e in 2070.

This would make limiting warming to a maximum of 2C, as agreed by governments in 2009, impossible to achieve, say the scientists.

They believe changing what we eat and drink is essential: “Only by also assuming reduced meat and dairy consumption do we find agricultural emission levels that do not take more than half of the total emissions space in 2070.

“We therefore conclude that dietary changes are crucial for meeting the 2C target with high probability.”

According to the UN’s Food and Agriculture Organisation, as countries develop the average protein intake per citizen increases, as does meat consumption.

This poses a growing problem, as portions of food from methane-generating animals such as cows and sheep have far higher carbon footprints than other foods.

A 2011 study from the US-based Environmental Working Group calculated lamb generates 39.3 kg of CO2e per kilo, while beef comes in at 27.1kg CO2e per kilo.

That’s 13 times more than vegetable proteins such as beans, lentils and tofu. 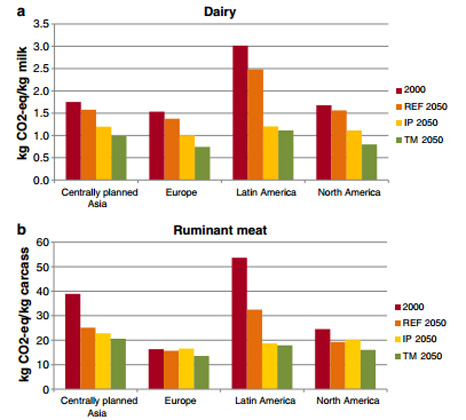 Speaking to RTCC, Fredrik Hedenus, one of the study authors, admitted their findings were “controversial” and said it would likely “take a long time” to change the average diet.

“We should already be thinking about how we can make our food more climate friendly,” he said.

He added that total emissions from eating meat and dairy products could be much higher, since land use change and the carbon footprint from animal-feed were not included in his calculations.

The study also illustrates the need for farmers in the developing world to learn more efficient rearing and production techniques.

Latin American emissions per kilo of milk or meat are on average five times those of Europe – especially significant since Brazil is the world’s largest beef exporter.

In the UK dairy farmers have committed to a 20–30% reduction of carbon dioxide, methane and nitrous oxide emissions by 2020 based on 1990 levels.

“The NFU is concerned about climate change projections not just for their possible domestic but also their international effect because farming is on the frontline of climate change impacts,” she said.

“The agricultural industry in England is playing its part in tackling the causes of climate change by committing to reducing its greenhouse gas emissions by 11% by 2020.”