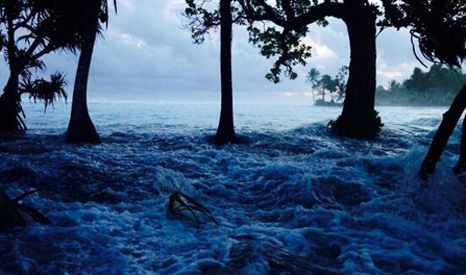 The U.N.’s Intergovernmental Panel on Climate Change (IPCC) said that costs already outweighed the benefits, and that much bigger damage loomed without large cuts in greenhouse gas emissions.

The report was cautious about projecting future costs of damage from climate change, saying this was hard to measure and unpredictable, especially if temperatures continue to rise.

The report is the second in a three-part series, and focused on impacts from climate change to date and the risks later this century.

In one of the most dangerous early impacts, the IPCC found that climate change was already undermining food production, threatening the world’s poorest people.

“Based on many studies covering a wide range of regions and crops, negative impacts of climate change on crop yields have been more common than positive impacts,” it said.

“Climate change has negatively affected wheat and maize yields for many regions and in the global aggregate.”

Warming had also impacted natural systems, including fish stocks and coral reefs, with ocean acidification a rising threat this century.

“Many terrestrial, freshwater, and marine species have shifted their geographic ranges. Glaciers continue to shrink almost worldwide due to climate change.”

Without cuts in greenhouse gas emissions, more serious impacts would damage the world economy and wipe out species.

“Global climate change risks are high to very high with global mean temperature increase of 4°C or more above preindustrial levels, and include severe and widespread impacts on unique and threatened systems, substantial species extinction, large risks to global and regional food security.”

“Global temperature increases of about 4°C or more above late-20th-century levels, combined with increasing food demand, would pose large risks to food security globally and regionally.”

“Impacts from recent climate-related extremes, such as heat waves, droughts, floods, cyclones, and wildfires, reveal significant vulnerability and exposure of some ecosystems and many human systems to current climate variability.”

The IPCC publishes its set-piece report on climate change every five to six years.

The latest study on climate impacts was the most authoritative yet, it said.

“The number of scientific publications available for assessing climate-change impacts, adaptation, and vulnerability more than doubled between 2005 and 2010.”