NEWS: Insurers on the frontline of climate change say more investment is needed in resilient infrastructure 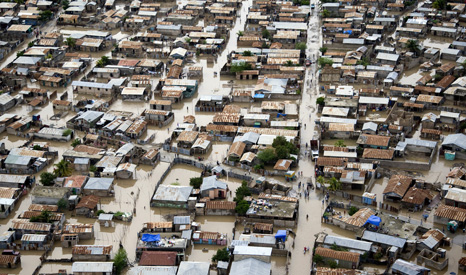 Flooding in Haiti during the hurricane season (Pic: UNICEF)

Insurance companies should emphasise the importance of boosting preparations for extreme weather events and other impacts from climate change, Swiss RE says in a report.

The reinsurance giant says its industry is “highly exposed” to future changes in the earth’s weather systems, revealing insured losses from weather-related events rose from 0.018% of global GDP between 1974 to 1983 to 0.077% of global GDP from 2004-2013.

It expects rising temperatures to lead to more frequent and severe extreme weather events in the future. The US Gulf coast alone could face an annual damage bill of $21.5 billion by 2030, it says. 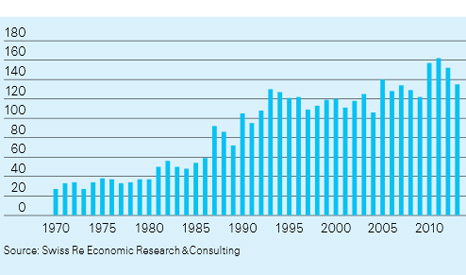 “That’s why we’re so vocal on adaptation and what societies need to do in order to better manage risks going forward,” he said.

“Climate change unabated will lead to a world economy which is very difficult from what we see today. This is a challenge we can only manage together.”

Swiss RE’s report, issued annually, reveals Asia was hardest hit by natural catastrophes in terms of economic losses and victims in 2013, but highlights how few of those affected have any form of insurance.

Typhoon Haiyan, which hit the Philippines in November, left 7,500 dead and nearly 4 million homeless. Of the $12.5 bn recorded losses, only $1.5 bn were insured.

In June flooding in the northern India state of Uttarakhand killed 6000. Losses to agriculture and houses totalled $1.1bn, but just under half of that was insured. 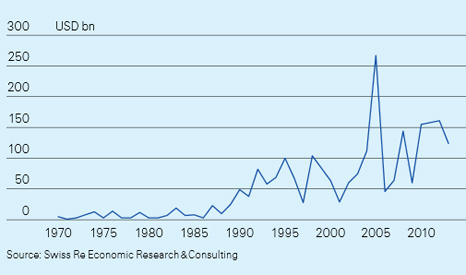 In October Cyclone Phailin destroyed over 100,000 houses in the Indian state of Orissa, wiping out 1.3 million hectares of cropland, leaving an estimated bill of $4.5 bn, mostly uninsured.

But Orissa’s effective evacuation plans are hailed as a major success. These saw 984,000 people from 18,000 villages removed from the disaster zone, meaning the death toll was minimal.

Data provided by insurance companies could play a key role in building resilient cities and communities, says Swiss RE, citing case studies that show up to 68% of climate-change generated losses can be avoided with cost-effective adaptation measures.

In the case of the US Gulf Coast, it argues levees at refineries, roof cover retrofits, beach replenishment and improved building codes could lower losses by US$ 1bn annually for an annual cost of US$ 0.15 bn.

“Urbanization, the clustering of properties and commercial activity and migration to high-risk areas such as coast and flood plains need to be closely monitored,” it adds. 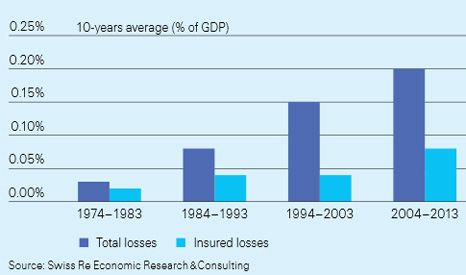 Some governments appear to be steadily waking up to the fact that in the future, extreme weather events arrive at regular intervals, with punitive consequences.

The UK is currently rolling out a flood re-insurance scheme for home owners in flood prone areas, while earlier this month US President Barack Obama announced a new $1 billion Climate Resilience Fund as part of his 2014 Budget.

But in developing countries, insurance cover is less regular, prompting organisations like the PwC-backed CDKN to work with Pakistani lawmakers to devise a scheme that protects poor people in the event of flooding.

Swiss RE’s figures indicate insurance costs to consumers and the industry are likely to rise.

“If you take a position of sit and wait, then you have reason to be nervous. But if you proactively manage the risk, which is what we propose… then a level of nervousness that keeps you alert is fine,” said Bresch.