Extra CO2 in the atmosphere may produce larger yields of crops, but they will be less nutritious, says UN science report 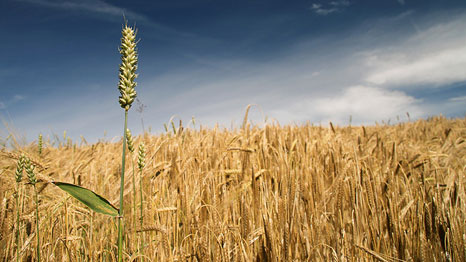 Food crops will gain little nutritional value from the higher yields expected as a result of rising atmospheric carbon dioxide, shows research to be published in a UN report next week.

The studies suggest that more optimistic views of the impacts of climate change on crop yields this century may be misplaced.

The UN report, leaked online, is the second of a three-part review which the Intergovernmental Panel on Climate Change (IPCC) publishes every five to six years on the threats posed by global warming.

Next week’s study reports on climate impacts, where the outcome for food production is probably the most critical, alongside sea levels.

Many studies on food impacts of climate change produce two sets of results, with and without the effects of carbon fertilization.

For example, one study published earlier this month and referred to in next week’s IPCC report, found that the number of malnourished people worldwide could rise by 27 million in 2050 as a result of the effects of more intense droughts and floods.

However, the number of malnourished people would fall by 37 million people after accounting for carbon fertilization, according to the paper, published in the Australian Journal of Agricultural and Resource Economics.

Photosynthesis is the process where plants use light to drive chemical reactions which capture carbon dioxide (CO2) from the atmosphere and convert it into sugar, providing the fuel for almost all life on Earth.

Enzymes in the leaf can react with oxygen instead of CO2, however, leading to a much less efficient process called photorespiration.

Some plants, called C4, such as maize, have adapted specially to avoid this outcome, by deliberately trapping the CO2 first and then releasing it in a separate part of the leaf where sugar is produced.

In this way, it is more likely to run on CO2 than oxygen.

Most plants do not have this adaptation, and their output is reduced by about a quarter as a result of photorespiration.

A wide-ranging review of some 228 experiments found decreases of 10 to 14% in the edible portions of wheat, rice, barley and potato, when grown at higher levels of CO2.

Elevated CO2 can also lower the nutritional quality of flour produced from grain cereals, according to various studies published in 2009 and 2010.

Mineral concentrations were affected as well as protein.

Studies found decreases in zinc, sulphur, phosphorus, magnesium and iron in wheat and barley grain, increase in copper, molybdenum and lead, and mixed results for calcium and potassium.

“Overall, there is robust evidence and high agreement that elevated CO2 on its own likely results in decreased nitrogen concentrations,” the IPCC said. Nitrogen is the main constituent of protein.

“Nutritional quality of food and fodder, including protein and micronutrients, is negatively affected by elevated CO2,” the IPCC added.

While such crops will contain less protein and fewer nutrients, the level of calories may be unaffected, however, and so the impact on human health will depend on which aspect a particular consumer most lacks.

“Since calorie intake is the primary concern in many food insecure populations, even if intake of minerals is decreased, those negative effects could be outweighed by increased calorie intake,” the IPCC report said.

“In assessing impacts on health, current diets must be considered. Decreased mineral intake will matter for those who currently do not meet, or just barely meet, requirements, but will not affect those who already exceed requirements. Little is known about combined effects of climate change (CO2) factors on food quality.”