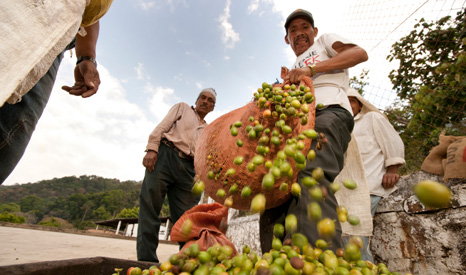 Global supplies of coffee, the most popular beverage on the planet and second largest traded commodity, will be placed under intense stress in a warming world, a UN climate science panel will say next week.

“In the main coffee producing states of Minas Gerais and Sao Paulo the potential area for production would decline from 70-75% of the states to 20-25%, production in Gioas would be eliminated,” a draft text seen by RTCC and set to be published next Monday reads.

A 3C rise in the state of Sao Paolo, which provides 10% of the country’s coffee beans, would cause a 60% decline in production, it says, costing the area $300 million.

Future temperature rises are expected to occur over a prolonged period of time, but any sharp drop in supplies from Brazil would likely have a swift impact on coffee prices, given the country’s dominance on world markets.

Brazil’s farmers are responsible for one in three cups of coffee drunk around the world, equal to around 49,152 bags of beans, which weigh 60kg each.

The impacts of extreme weather have already hit Brazil’s coffee farmers once this year, after a drought over January and February wiped out around 25% of crops and forced 140 cities to ration water.

“Clearly any supply shock from such a large producer will have a disproportionate impact on the price,” said James Hearn, co-head of Agricultural commodities at Marex Spectron Ltd.

Demand for coffee has risen sharply in the past decade.

The number of coffee shops in the UK alone grew 4% to 15,723, according to analysts Allegra Strategies, generating a turnover of £5.8 billion.

The IPCC study, compiled from a series of peer-reviewed papers, also warns rising temperatures could reduce the suitability for crops in Costa Rica, Nicaragua and El Salvador could be reduced by more than 40%, affecting around 1.4 million people.

And in Africa the highland Arabica coffee-producing areas in Ethiopia, Kenya, Uganda, Rwanda, and Burundi could be threatened if the coffee berry borer beetle migrates with warming weather.

Coffee trees can take up to five years to bear fruit after planting, and are highly sensitive to changes in climate, Aaron Davis, Head of Coffee Research at the Royal Botanic Gardens told RTCC.

“To me it’s a flagship species that tells a much broader story, and cuts right across wild forests, savannahs and agriculture production systems,” he said.

“Some growers are already having to adapt to climate change to keep them in business.”

Farmers in East Africa were already facing failed harvests due to prolonged dry seasons, Davis added, an event that has not happened “in living memory”.