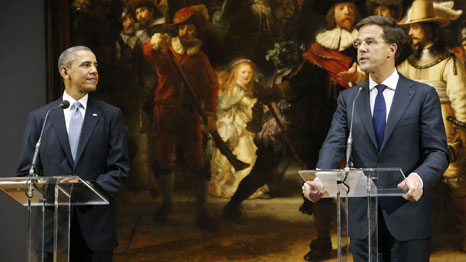 The Netherlands will no longer provide money to new coal projects overseas, announced the prime minister today, joining the US in a bid to stop the growth of coal.

“The Netherlands is joining with the United States and a group of other countries in a bid to stop international public funding of new coal-fired power plants, for example by multilateral development banks,” said Rutte, during a joint press conference with Obama in Amsterdam today.

“We want to achieve an international level playing field, to ensure that private and public parties invest in green growth wherever possible.”

Obama arrived in the Netherlands this morning. His European trip will ostensibly focus on nuclear security, but the crisis in Ukraine is expected to cast a shadow over the proceedings.

Despite this, Rutte said during a press conference this morning that climate change was the first topic that he discussed with Obama during their meeting.

Former Dutch lead climate negotiator Maas Goote said that it was a “surprise” that climate change featured so prominently, given the distraction of Russia’s actions in Crimea.

@rtcc_edking That climate change features prominently in very short statement (on Ukraine and nuclear safety) is a surprise here in NL.

Starving new coal projects of public finance is a method that developed countries are using to stem the growth of coal consumption overseas. Coal is the cheapest source of energy, but also the most polluting.

The US announced that it would no longer finance overseas coal-fired power plants in June last year as part of Obama’s climate action plan. In September, the leaders of Denmark, Finland, Iceland, Norway and Sweden announced that they would follow suit.

In November, the UK also announced that it would stop supplying money to new coal projects overseas. Energy and climate change Secretary Ed Davey said that it was “completely illogical” for countries like the UK and US to work on cleaning up their own energy sector, while paying for coal-fired power plants in other countries.

The danger of building new coal power plants abroad is that it locks poor countries into a high carbon future, when the world needs to transition towards clean energy if it is to avoid dangerous levels of climate change.

Multilateral banks such as the World Bank and the European Bank for Reconstruction and Development have already pledged to limit their spending on coal-fired power plants, drying up a large pool of resources for such projects: in the year leading up to June 2010, the World Bank spent US$ 3.4bn on new power plants – a quarter of all its energy project funding.

While private investors are free to continue funding projects, limiting public spending signals that investing in coal is becoming increasingly risky, and could encourage them to divert their capital elsewhere.

In a joint statement, Obama and Rutte said that both countries supported efforts by the UN to scale up the sum of money being spent on climate finance.

By 2020, developed countries have pledged to put US$ 100billion a year into a pot of money called the Green Climate Fund, which will be used to help poorer nations to adapt to climate change and cut their emissions.

“We strive to deploy public resources to catalyze private climate finance in and to developing countries,” they said.

They also reaffirmed their mutual interest in securing a strong deal on climate change, which the UN says must be signed off next year, adding that the new deal should “reflect the continuous evolution of capabilities of countries in tackling this global challenge.”

They said: “Our two countries pledge to continue our cooperation towards adopting such an agreement at the United Nations climate conference in Paris in 2015.”