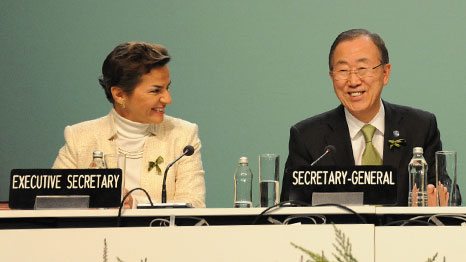 UN Secretary General Ban Ki-moon has asked countries to “rediscover the commitment” that led to the establishment of the UN’s Convention on Climate Change, as it celebrates its twentieth anniversary.

The UN Framework Convention on Climate Change (UNFCCC) entered into force in 1994, setting up the basis upon which countries would start their efforts to tackle global warming.

Twenty years later, the UN is still trying to negotiate an agreement that will secure the original goal of the Convention: to avoid dangerous levels of man-made climate change.

Countries have agreed to sign a new international treaty aimed at doing just this in Paris 2015.

“We know what we need to do and how to do it,” said Ban Ki-moon. “As we mark this anniversary, let us rediscover the commitment that brought the Convention to life. Let us work together for a meaningful climate agreement that will set the world on a sustainable path for generations to come.”

The UNFCCC has given the world the tools to tackle climate change, Ban continued, including carbon trading mechanisms and the Kyoto Protocol, which was the world’s first – and so far only – legally binding climate change treaty.

He said the UN’s Reducing emissions from deforestation and forest degradation (REDD+) programme has also helped to put a value of the world’s forests in order to prevent deforestation, a major driver of climate change.

“Our challenge now is to use this machinery, not only to tackle climate change, but to deliver sustainable energy for all, make the air in our cities fit to breathe, generate decent jobs and help eradicate extreme poverty,” he said.

To celebrate the twentieth anniversary, the UN has designed a timeline, outlining the progress that the Convention has made from its establishment to the present day. But, over the past twenty years, despite annual conferences aimed at reducing greenhouse gases, emissions have continued to rise as countries have failed to curb their hunger for oil and coal.

UNFCCC chief Christiana Figueres joined Ban in celebrating the “far-sightedness” of the Convention, but reinforced that this was a time for everyone to “reflect on the distance we all have yet to travel” in order to avoid dangerous climate change.

“The need is greater than ever and I hope this anniversary inspires everyone to recommit to the Convention, to its implementation and to a meaningful 2015 agreement.”

Jennifer Morgan from the WRI reflects on the last 20 years