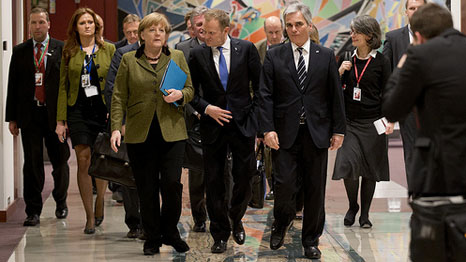 A draft set of conclusions seen by RTCC indicates EU leaders meeting at this week’s March Council in Brussels will postpone any final decision until the end of the year.

“The European Council will take stock of progress made on these issues at its meeting in June … with a view to taking a final decision on the new policy framework as quickly as possible and no later than October 2014,” the document says.

European governments have been split over when to release their 2030 strategy, which would also form the bloc’s contribution to a UN climate deal, set to be signed in Paris next year.

De Boer, who ran the UN climate body from 2006-2010, and is now head of the  Global Green Growth Institute, tweeted: “staggeringly nonsensical argumentation for a delayed decision. How to make yourself irrelevant in one easy step.”

@timbales staggeringly nonsensical argumentation for a delayed decision. How to make yourself irrelevant in one easy step.

He added: “delaying a decision till october for US/China news scheduled for spring 2015 is difficult to understand.”

The EU Commission outlined its plans for a 40% carbon reduction target and 27% renewable energy goal at the end of January.

Ministers from the UK, France, Germany and Italy have urged member states to adopt the proposals, which would likely encourage other major emitters like the US and China to follow suit.

But a small bloc of nations led by Poland and linked to lobbying groups representing heavy polluters are deeply opposed to the EU taking a lead, warning it could damage competitiveness.

“It would be a great advantage for the efforts of Europe but also of the whole world to reduce the emissions and make progress, if the EU is able to agree before the [Ban Ki-moon] summit,” he said.

This week’s discussions have gained added resonance given the ongoing crisis in Crimea, which threatens the EU’s huge gas imports from Russia, which account for 30% of the region’s needs.

Developing alternative sources of energy has risen to the top of the agenda of this week’s summit, with talks on fast-tracking renewables, building more energy interconnectors and importing gas from overseas all likely to figure.

Ahead of this morning’s meetings Denmark’s Foreign Minister tweeted: “Cross my fingers that Heads of State will link ambitious climate and energy package to more safe and indepen. energy for EU.”