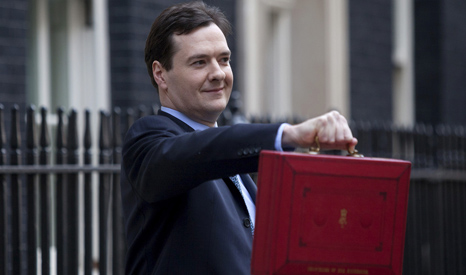 Britain will halt annual rises in its carbon tax from 2016, the government said in a budget announcement on Wednesday, in a policy reversal aimed at limiting energy costs for manufacturers.

The government also extended compensation for the tax for energy intensive industries, at a total of £500 million annually.

The finance minister, George Osborne, did not mention in his budget speech that the tax will raise far more, at £2.025 billion annually in 2015/2016, the year from which annual rises will be capped.

The carbon tax had come under increasing pressure for inflicting higher energy costs in a country which already has some of the highest wholesale power prices in Europe.

Britain confirmed the policy in 2010, and introduced the carbon price floor in April last year.

The aim was to override volatile European carbon prices with a steadily rising UK price, and so send a clearer signal to industry on future energy costs.

The Chancellor is financially incentivising the use of dirty coal. Bad, bad news for the climate. #Budget2014

The policy worked by applying a tax on suppliers of fossil fuels to power plants, whenever European carbon prices fall below a fixed British floor price.

The tax would make up the gap, and so ensure that British carbon prices met a rising minimum level through the rest of this decade, regardless of European carbon price volatility.

The British floor price was intended to rise from £16 per tonne of CO2 in 2013 to £30 in 2020, in constant 2009 prices. The tax is calculated after adjusting for inflation, meaning that the gap with European carbon prices is actually rising much faster.

European carbon prices are currently trading at about 6 euros, or £5.

British base load wholesale power prices are presently around £48 per megawatt hour one month ahead, which means that the carbon tax from April 2014 accounts for about 8% of the power price, assuming gas is the marginal power plant.

By comparison, continental European base load power prices are around 36 euros, or £30, illustrating the pressure on Osborne at least to halt annual rises in the tax.

In other measures to support manufacturers, the government announced some £500 million annual compensation for energy intensive industry in the four years from 2016-2020.

That figure remains far less than the amount that the carbon tax raises, at £2.025 billion annually in 2015/2016, the year from which the annual rises are capped, suggesting that the tax remains very much cash positive.

The government has not decided whether to return to a rising trajectory of carbon price floor (CPF) after 2020.

“The government will review the CPF trajectory for the 2020s, including whether a continued cap on the Carbon Price Support rate might be necessary, once the direction of reform of the EU Emissions Trading System is clearer,” it said, in its full “Budget 2014” report.

The budget was very light on additional support for low carbon energy, limiting this to £60 million support for new innovation in carbon capture and storage technologies.