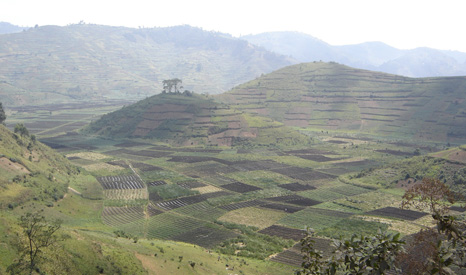 Rwanda is one of the most densely populated countries in Africa, and one of the poorest in the world (Pic: notphilatall/flickr)

Rwanda’s energy minister says the recent announcement of an 8.5 megawatt solar photovoltaic project is just the start of the country’s investments in clean energy.

Emma Francoise Isumbingabo told RTCC the government is keen to build on the success of the $24m deal, which will make Rwanda the first country in east Africa with a utility-scale solar plant.

“We’re happy to have 8.5MW, but we have a roadmap to reach 563MW, to ensure 11.5% economic growth,” she said, adding that hydropower, geothermal and peat would also play a role in powering the country.

The 8.5MW PV plant, which is being constructed outside the capital Kigali, was the idea of American-Israeli entrepreneur Yosef Abramowitz, chief executive of the Energiya Global Capital group.

The Dutch development bank FMO and Norwegian development body Norfund also provided capital for the plant, which Isumbingabo says could be the first of many.

“Rwanda is making it easy for investors… solar project was the quickest project that I have ever seen. It was financed within 5-6 months, which in my opinion was a very big success,” she added.

Only 17% of Rwandans have access to electricity. The government hopes to connect its 11 million-strong population to the grid by 2017.

According to the government’s last submission to the UN climate body, biomass represents 86% of the energy consumption, while the country also relies heavily on diesel generation for electricity.

By 2017 Isumbingabo says the country should have an electricity generation capacity of 1000MW, with hydropower, geothermal, peat and solar dominating the energy mix.

In a report published in November 2013, analysts at Bloomberg New Energy Finance say the government could source all of its electricity from renewables by 2020.

They say investment in the grid and clean energy generating capacity would cost $4.9 billion, compared with an estimated $3.4bn for the 935MW of fossil and clean capacity already in the pipeline.

“The business as usual plan for Rwanda is to achieve 100% electricity by around 2030 using mix of renewable energy, gas and peat,” said Kieron Stopforth from BNEF.

“This work shows it should be possible to deliver 100% energy access in Africa at the same or lower cost and more quickly using renewable energy.”

According to the International Energy Agency’s 2013 World Energy Outlook, around $602 billion is required to provide universal access to electricity by 2030, an average of $30 billion per year.

Sub-Saharan Africa accounts for 64% of the additional investment required.