Negotiators say progress has been made at Bonn talks, but some warn time is running out to deliver a draft text by Lima 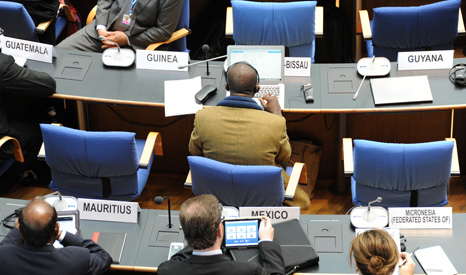 The glacial pace of the UN climate talks has picked up slight momentum at UN climate talks this week, envoys with both poor and rich countries said today, but others warned a potential global deal by the end of 2015 will need to reach key staging posts before the end of this year.

An EU diplomat told RTCC “substantive conversations” on what the text for a any deal could look like were already taking place.

But there has been no progress on what legal force any deal would have, or whether a draft will be ready for this year’s main summit in Lima this November.

Negotiators  mindful of the disappointing outcome from the Copenhagen climate summit in 2009 say tangible agreement will need to be made before the end of this year for the Paris 2015 talks to be able to agree major tenets of a deal to cut greenhouse gases blamed for warming the planet.

Bangladesh’s Quamrul Chowdhury, lead negotiator for the Least Developed Countries, said he is still hopeful that “meat and flesh” will be placed on the framework of an agreement this year.

“People are still showing their red lines and their limitations, but also there are common grounds, common landing zones, arising. Hopefully we are moving positively in the right direction, but still there are a lot of clouds,” he said.

“My reflection as one of the Least Developed Country negotiators is things are moving in a positive direction, and it will unfold gradually, not everything in one single course. No one is blocking, so that is positive.”

The lead negotiator for France, hosts of the 2015 climate summit, said clearer momentum still needs to emerge with few days of formal negotiation left this year before the Lima meeting.

“What we need is a real sense of dynamic, that this is moving forwards, that people are starting to prepare a text,” Paul Watkinson told RTCC.

“Until now we’re just turning around, looking at each other as if we’re not quite sure where to start, and I think we now need to start,” the envoy for France added.

Fierce exchanges between countries over who is responsible for tackling climate change marked the first two days of this meeting, which concludes on Friday.

Poorer countries are also pointing to a lack of financial support for low carbon investment, arguing it’s impossible to plan for a cleaner future they cannot afford.

But in a sign the patience of some observers is wearing thin, the NGO newsletter ECO, which has covered environmental conferences since 1972, accused the US and China of being in a ‘perpetual time warp’, demanding delegates face up to the dangerous realities ‘the sooner the better’.

Arguments over the process of negotiations have also eaten into time, with the G77 and China calling for a more formal set of ‘contact groups’ where the process is driven by countries, and not by UN officials.

since #ADP2014 had no agenda to adopt, one would have expected no procedural struggles. but that was underestimating negotiators’ creativity

Many countries hope that the elements of this agreement will be set out during the course of this session, although pen has yet to be put to paper on what the final draft might look like.

Ronny Jumeau, who represents the Seychelles at the UN climate talks, told RTCC that given the current pace of discussions, it’s likely another set of talks for October will need to be arranged.

This would take place between a summit to be held by UN Secretary General Ban Ki-moon in September and the UN climate body’s annual conference, which takes place in Lima, Peru.

Ban has called for heads of state to come to New York, bringing with them ambitious pledges on tackling climate change, ahead of official contributions to the new agreement in  the first quarter of 2015.

“We don’t want to start a new conversation from scratch in Lima,” said Jumeau, who this afternoon will call for the additional meeting.

An extra session in October would help countries to make sense of the outcome of Ban’s summit, he added.

“The more work that’s left unfinished by Lima, the less conducive it’ll be to a productive set of negotiations. We’re trying to get as much done as possible between now and Lima.”

He said the Alliance of Small Island States is already factoring such a meeting into their internal planning.

At #ADP2014, @wbclimatechange warned of the consequences of overstepping the max 2 degrees C goal for the poor pic.twitter.com/GHVSX3hilw