Richard Branson: business must ‘stand up to climate deniers’ 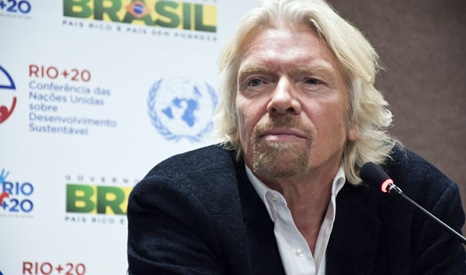 Virgin Group boss Richard Branson has backed tech giant Apple’s call for climate sceptic shareholders to get out of  company stock rather than complain about corporate efforts to cut carbon emissions.

Branson, who made billions from his Virgin Group’s interests in music, airlines and financial services, said more companies should  stand up to shareholders that questioned whether combatting climate change is worth the higher costs.

The Virgin boss was speaking after Apple chief executive Tim Cook last week told shareholders opposed to the company’s sustainability policy “to get out of the stock”.

“He (Cook) also commented on how doing business sustainably can actually improve the bottom line. We wholeheartedly support him,” Branson said in a blog, adding “I would urge climate change deniers to get out of our way.”

Earlier this month a conservative think tank and Apple shareholder group National Center for Public Policy Research said climate change is a “chimera” and claimed “over 95 percent of all climate models have over-forecast the extent of predicted global warming.”

Apple, the world’s largest technology company, has in the past year responded to criticism of its environmental record by auditing its suppliers more closely, stepped up investment in renewable energy and appointed Lisa Jackson, the former head of the US Environmental Protection Agency, as an advisor to Cook

Virgin is founder member of the Carbon War Room, a group of companies that tries to find ways of financing low carbon technologies in sectors such as heavy goods transport and shipping, and is a major buyer of offset credits that funnel finance to developing countries.

However Branson’s interests in airlines, flights in space for the rich and his globe-trotting lifestyle have opened up the billionaire to charges of hypocrisy.

Green groups point that even if companies are becoming less wasteful and more efficient per unit, their priority on high growth can mean more use of overall resources.