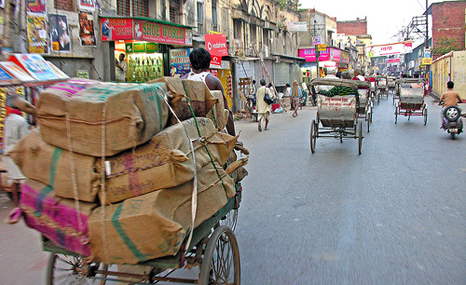 Increasing pollution is not only harming Kolkata’s citizens – it’s also a likely contributor to climate change taking place in the Himalayan region.

According to a 2012 report by the New Delhi-based Centre for Science and Environment on air quality in Kolkata, seven out of every ten people in the city suffer from some form of respiratory ailment: not surprisingly, traffic policemen and the city’s thousands of street dwellers are among the high risk groups.

Meanwhile the government’s own Central Pollution Control Board gives Kolkata and New Delhi the unenviable status of being joint winners of India’s most polluted city prize.

All this is not just bad news for people living in Kolkata and India’s other major urban conglomerations. The increasing air pollution in India’s cities – particularly those in the northern parts of the country – also has an impact on the degree of melt taking place in glaciers in the Himalayas.

Diesel fumes, along with smoke from coal burning, cooking fires and the burning of waste, are among the main sources of particulate matter called soot or black carbon. Recent studies suggest that funeral pyres and even the burning of incense at temples are also contributors to the accumulation of soot.

This black carbon rises into the atmosphere and is driven by winds on to the snow or ice in the Himalayas, darkening the surface and in the process reducing reflectivity and causing the surface to absorb more heat.

The International Centre for Integrated Mountain Development (ICIMOD), based In Kathmandu, Nepal, is the only trans-boundary organisation looking at climate developments across the Hindu Kush-Himalayan region.

According to ICIMOD estimates, black carbon is likely responsible for a large part – around 30% by some calculations – of glacial melt in the region.

It says most of the black carbon deposited in the Himalayas and in the southern area of the Tibetan Plateau comes from the plains of India, while black carbon on the eastern and northern parts of the Plateau originates in central China.

ICIMOD says that while data is limited, studies suggest black carbon may not only be a factor in hastening the melt of mountain glaciers – it could also substantially alter rainfall patters and affect the behaviour of the monsoon.

While many well-organised environmental NGOs and other groups have formed in India in recent years, the environment – and climate change – does not come high on the political agenda.

A late 2013 study by the World Bank and the International Cryosphere Climate Initiative (ICCI) said that up to a million deaths could be avoided each year in the Himalayan region by cutting back on emissions of black carbon and methane.

The study also said that regional yields of crops such as rice and wheat could be significantly improved by reducing black carbon.

“The health of people around the world will improve greatly if we reduce emissions of black carbon and methane”, says Jim Yong Kim, the World Bank president.

“Limiting these emissions will also be an important contributor to the fight against climate change.”