Pace of change at North Pole is surprising scientists: latest studies show the region is at its warmest for 40,000 years 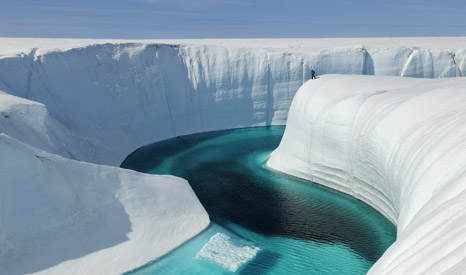 The season without ice in the Arctic is getting longer by an average of five days every 10 years, according to a new study in Geophysical Research Letters.

And in some regions of the Arctic, the autumn freeze is now up to 11 days later every decade. This means that a greater proportion of the polar region for a longer timespan no longer reflects sunlight but absorbs it.

This change in albedo – the scientist’s term for a planet’s reflectivity – means that open sea absorbs radiation, stays warmer, and freezes again ever later.

None of this is news: sea ice in the Arctic has been both retreating and thinning in volume for four decades.

Researchers have tracked the retreat of the snow line to find tiny plants exposed that had been frozen over 40,000 years ago: the implication is that the Arctic is warmer now than it has been for 40 millennia.

This warming threatens the animals that depend for their existence on a stable cycle of seasons  and is accelerating at such a rate that the polar ocean could be entirely free of ice in late summer in the next four decades.

So Julienne Stroeve, of University College London and her colleagues have provided yet further confirmation of an increasing rate of change in the region in their latest study.

The scientists examined satellite imagery of the Arctic for the last 30 years, on 25 square kilometer grid, to work out the albedo of each square for every month they had data.

Their headline figure of five days is an average: in fact the pattern of freeze and thaw in the Arctic varies. In one region the melt season has been extended by 13 days, in another the melt season is actually getting shorter.

This increasing exposure to summer sunlight means that ever greater quantities of energy are being absorbed: several times the energy of the atomic bomb dropped on Hiroshima hits every square kilometer of the open Arctic Ocean.

“The extent of sea ice in the Arctic has been declining for the last four decades,” said Professor Stroeve, “and the timing of when melt begins and ends has a large impact on the amount of ice lost each summer.

With the Arctic region becoming more accessible for longer periods of time, there is a growing need for improved prediction of when the ice retreats and reforms in the water.”