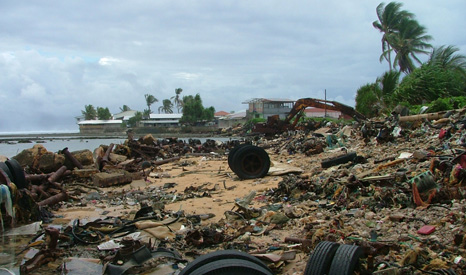 Pollution and debris left behind on Majuro’s beaches after the latest set of ‘king tides’ (Pic: Benedict Yamamura)

Debates over climate science report have been branded “futile” by the foreign minister of the Marshall Islands, whose capital is recovering from being flooded by the Pacific Ocean.

Phillip Muller said climate change was the “only” explanation for an increase in the frequency and ferocity of ‘king tides’ that hit Majuro this week.

The flood waters forced 1000 to leave their homes, damaged 70 houses and briefly placed the international airport out of action.

“For those of us in the Pacific, silly discussions about the scientific truth of climate change are futile,” Muller said.

“We see with our own eyes that the oceans are rising, and our tide gauges confirm it.  We know there is only one explanation for this unprecedented phenomenon – climate change has arrived.”

Parts of the Marshall Islands, home to around 70,000 people, are only 30cm above sea level.

The latest study by the UN’s climate science body, the IPCC, predicts oceans could rise by 80cm this century, which would be enough to cover two-thirds of the islands.

Muller said the country is still committed to hosting this year’s gathering of the Cartagena Dialogue, a group of developed and developing countries with a shared national interest in securing ambitious global action on climate change.

“Work this year is critical to ensuring that we get the ambitious agreement we need before it’s too late for the Marshall Islands and other vulnerable countries around the globe,” he said.

“What better way to energize the world’s climate diplomats than to have them see our struggle for climate survival with their own eyes?”

Around 60 ambassadors and international climate experts are expected attend the meeting in Majuro, which takes place between April 1-4.

The 12-page document says governments in the region are committed to demonstrating ‘climate leadership’ and calls on countries to list ‘specific’ pledges to reduce pollution.

Other countries who have backed the declaration include the UK, USA, Mexico together with the EU’s 28 member states.