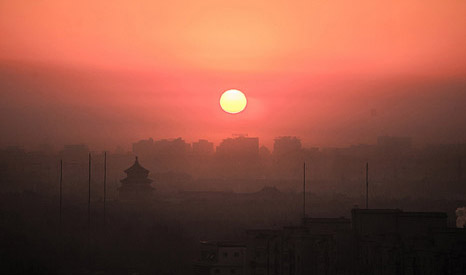 China’s pilot emissions trading schemes are being put into the shade by direct measures to cut smog, which if enforced properly would be much more effective in slowing growth in C02 as the central government says it is getting tough on coal.

The world’s largest emitter is to “declare war” on pollution, Premier Li Keqiang told an annual meeting today of China’s rubber stamp parliament, as the government outlined more details on measures to curb choking smog and encourage power generators to move away from coal, which has a 65-70% share of the country’s energy mix.

Li said efforts would focus first on reducing harmful particulates and phase out antiquated power plants and factories in the heavily-industrialised provinces which surround major cities such as Beijing and Shanghai.

China’s premier added that further reforms will be made to energy pricing to encourage renewables and nuclear and so-called smart grids.

The country has many of these policies in place already and previous commands by central government to cut pollution have been blunted by regional officials keen to promote fast economic growth based on cheaper coal-fired power and heavy industry.

China is also using emissions trading schemes to cap carbon emissions, but pilot programmes are at a very early stage, varying widely between the service-orientated big cities  and heavy-industrial provinces.

This month Hubei’s emissions trading scheme will become China’s second-biggest in terms of emissions covered and one of the few that obliges heavy industry to pay for some of their credits rather than have all of them handed them out for free.

With nascent regional emissions trading schemes unlikely to have a major impact in cutting carbon, China’s politburo has become increasingly determined to tackle the problem directly and defuse the political impact of increasingly dire air quality in cities.

China’s growing  middle class is venting its anger about worsening pollution on social media, meaning the government is looking for fast results.

The introduction of a cap on the use of coal is a strong  sign that officials are taking it seriously, Wyns said, while threats to provincial governors that they will be fired if they don’t meet targets on coal use means direct accountability on pollution.

Actions by central government are likely to be more effective in the shorter term than emissions trading, because of the risks and rewards now being built into China’s political system on environmental issues, he added.

The key question will be whether senior officials in China’s provinces really will lose their jobs if targets on cutting coal use and pollution aren’t met, observers point out.

Although the worsening pollution in major cities suggests otherwise, growth in China’s coal consumption slowed to 2.6% in 2013, far below the near-double digit growth seen earlier in the decade, according to figures released by the China National Coal Association.

Startling NASA satellite image of the Beijing and Northern China – the grey is smog pic.twitter.com/2epfbfMBQC

These trends, and tougher regulations on the building of new coal-fired power plants, mean the country may reach peak demand by the end of the decade.

However, without much tougher action, coal consumption is likely to be on a plateau for the coming decades because of locked in demand from newly-built coal-fired power stations, the IEA has said in recent reports.

Only a national carbon trading scheme and an ambitious cap on emissions would prevent the shifting of emissions away from crowded, relatively prosperous coastal regions to the coal-rich interior, Zhang, an advisor to China’s State Council told RTCC.

“All major emissions-intensive business should be covered. The fossil fuel sector shouldn’t just be covered by an emissions trading scheme, the external environmental costs should be taken into account and subsidies gradually removed, said Zhang, who is an academic with the Development Research Center of the State Council.

Yet despite the increased use of government edicts, centralised power has limits and cutting emissions will require a multi-pronged approach in China’s increasingly market-based economy, Zhang said.

Measures such as carbon taxes, regulations, and efficiency standards could also marshall resources towards energy efficiency and lower carbon energy, he added.

Ailun Yang, an analyst with World Resources Institute in Washington, said it would be premature to judge the likely effectiveness of pilot emissions trading schemes, but added the government will soon need to outline what emissions trading in China might be able to achieve in terms of emissions cuts.

China’s efforts to cut greenhouse gas emissions will be a major issue in UN climate talks that resume later this month, as actions by big emitters will be closely scrutinised in the run up to talks at the end of 2015 aimed at agreeing a post-2020 climate deal.

China’s next 5-year plan, which will run from 2016 to 2021, will be outlined in greater detail later this year and next, when a clearer picture is likely to emerge on a potential national carbon emissions trading scheme.

Green groups say that without a high carbon price in any future national emissions trading scheme, China will find it difficult to move away from coal in the coming decades, making it much more difficult for the world to avoid runaway climate change.