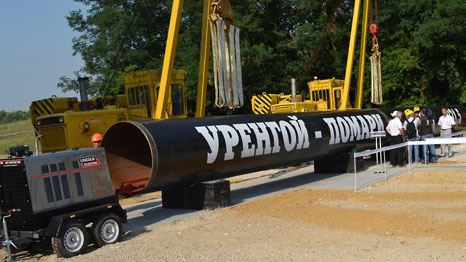 The current crisis in Ukraine should remind European politicians that low carbon sources of energy offer more security than imported fossil fuels, the former head of the UN’s climate body has told RTCC.

“I remember working on climate policy in the EU at the time when Russia for the first time closed the gas pipeline to Ukraine,” said Yvo De Boer, who led UN climate negotiations from 2006-2010.

Around 30% of Europe’s gas comes from Russia, 16%  piped through Ukraine. In 2006 and 2009 Russia shut down the pipelines, causing over two weeks of shortages in eastern and central Europe.

There are growing fears these supplies could again be threatened if the conflict in Crimea escalates. Meanwhile the price of gas soared by 10% yesterday in response to tensions according to data compiled by Bloomberg.

Discussions on #Ukraine show the implications of EU being dependent on so much energy imported from outside http://t.co/6NRPDbPYta #EU2030

EU environment ministers are in Brussels this week debating the region’s long term climate and energy strategy, where they look likely to recommend a 40% carbon reduction target and a goal for 27% of renewables in the energy mix by 2030.

Their talks have been marked by fierce differences between various blocs, but de Boer, recently appointed head of the Global Green Growth Institute, says previous energy disputes between Russia and Ukraine had “a very positive impact on the climate and energy debate inside the EU”, and could yet affect Brussels’ final decision.

This point was picked up on by the EU Climate Commissioner Connie Hedegaard, who said heads of state needed to recognise the wider implications of the 2030 package when they meet in Brussels on March 20-21.

“In the building across the street where the foreign ministers have been discussing Ukraine, I think we have also seen the political implications of Europe being dependent on so much energy being imported from outside,” she said.

While the crisis in Ukraine could help tougher policies to tackle climate change make their way through the EU, in the short term the disruption is likely to come at a cost to the climate due to higher gas prices.

This will stimulate demand for coal, says Antony Froggart, an expert in energy policy at Chatham House, which is already attractive given the low price of emitting carbon under the EU emissions trading scheme.

“Russia is Europe’s larger supplier of energy, be it coal, gas or oil. Political instability in relation to Russia obviously affects that,” says Froggart. “It affects it not only in terms of potentially changing the volume of exports, but also in terms of the price, so insecurity will often lead to higher prices, regardless of impact on supply.”

But he agrees that, in the longer term, the volatility of the market could help to change the tone within the EU about the desirability of the transition to a low carbon economy – a discussion that will be taking place this month when the European Council meets to discuss a package of new climate policies proposed by the Commission in January.

“If you take political decisions around the 2030 package does this accelerate or enhance the discussions about setting stronger renewables targets? People see that renewables are good not only for climate but potentially for energy independence and price stability,” says Froggart.

Others point to the inherent fragility of the EU’s energy market as its real weakness, arguing for greater cooperation between member states, rather than a rush for renewables.

“Certainly, it’s part of an argument that low carbon energy is good for energy security because reliance on fossil fuels leave you vulnerable to these kinds of geopolitical disruptions,” Michael Bradshaw, professor of global energy at Warwick Business School told RTCC.

“But another response might be to say that if we have a properly functioning energy market, an interconnected European energy market, and alternative sources of supply then the market should function.”