Netherlands to upgrade flood defences to cope with climate change 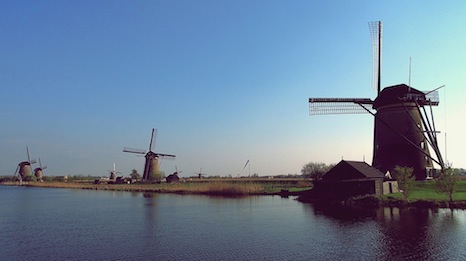 A national effort is underway in the Netherlands to upgrade the thousands of miles of dykes and dams responsible for keeping the country dry.

As the planet warms, experts say the Netherlands’ network of flood defences will no longer be able to hold up against rising sea levels, and this autumn, the government will explain how it plans to hold the sea back for another century.

In 2007, an investigation was launched into whether the the famously low-lying country could survive at all should projections of almost a metre of sea level rise by the end of the century come to pass.

A committee concluded that life could go on in the Netherlands, but work must begin immediately to upgrade the country’s 3,700km of dykes, dunes and dams, which hold back the water in the country’s most vulnerable coastal areas.

On the committee’s advice, a Delta Programme was set up, which began work on a new policy framework for the country that will be put before Parliament this September, including five “Delta Decisions” that will form the basis of the country’s new water strategy.

These five decisions lay out concrete ideas on how the Netherlands can deal with some of the biggest challenges posed by their troublesome geography.

The proposals will renew the government’s strategy on water safety and flood risk management, the future scarcity of freshwater supplies, and spatial planning of new buildings and infrastructure.

They also propose specific plans for the most vulnerable regions of the Netherlands, the IJsselmeer region and the Rhine-Meuse Delta.

The Dutch government’s orginal plans were prompted by the release of Al Gore’s 2006 documentary “An Inconvenient Truth”, which raised the spectre of ever rising sea levels.

“It started with Gore,” says Jos van Alphen, from the Delta Commissioner’s office, the group responsible for the programme. “Partly as a result of that, the Dutch government wondered whether we can continue living in the Netherlands due to climate change.”

The Netherlands already has a flood strategy in place — a Delta Act was passed in 1959 in the wake of devastating floods that killed 1,836 people six years before — but van Alphen explains that the new proposals will take this next stage of protection in a new direction to cope with arising challenges.

He says: “Flood risk standards will be more directed to avoid fatalities and societal disruption. As we have seen in New York, modern societies, especially very densely populated urban areas, are very vulnerable to flooding because of electricity and transport that might be affected.”

Social and economic changes since the 1960s in the Netherlands have provided a further prompt to upgrade the flood defences.

Willem Ligtvoet, an advisor to the Dutch government on flooding, from the PBL Netherlands Environmental Assessment Agency says: “Since the old standards were first proposed the population has grown, the economic value of flood sensitive areas has grown enormously and we know a lot better the quality of our dykes.”

Another round of floods in 1995 inspired a 20-year programme to improve the country’s flood defences, including a scheme called ‘room for the river’. But the new strategy does not have a finite end point. “With the Delta Programme, we are aware that the work is never done, that you always have to continue,” says van Alphen.

A long history of exposure to flooding means that the Dutch are experts when it comes to building defences, both technically and politically.

For centuries, the nation performed the role of international agony aunt when other countries found themselves beset by water problems.

Examples range from the 17th century decision to draft in Dutch engineer Cornelius Vermuyden to find a way to drain the Cambridgeshire Fens, to more recent knowledge sharing in the wake of restoration and delta planning in New Orleans, Vietnam, Bangladesh and Somerset.

When it comes to their own strategy, the Dutch are approaching the problem with equal gravity. The government has set aside up to €1 billion a year up to 2100, as part of the national budget.

Sensing a financial opportunity, this has drawn business into the plan, says van Alphen. “Industry is interested because they see a lot of work, but also large opportunities for new innovations and they can be exported to other countries, and they can earn money from those innovations as well.”

Local communities are also largely on board, he says, in spite of the fact that some may face relocation as dykes and levees are strengthened. This is due to the fact that schemes to improve local areas with parks and recreational areas have been built into the plans, but also because there is a great deal of trust in the government to deal with the flood defences as necessary.

In the Netherlands, defences are so well organised that people aren’t scared of flooding anymore,” says Ligtvoet. “The Dutch people think it’s taken care of: we won the fight against water.”

Once the Dutch government has embedded these new strategies into its legislation, it will have concretely achieved something that some countries are still struggling with conceptually: it will have established a long term, well funded climate adaptation plan, which aims to prepare the country for all eventualities.

“The details of climate change are uncertain. It might be very gentle, or it might accelerate,” says van Alphen. “It’s very difficult to design measures for a specific future situation, because you don’t know exactly what that situation will be.

“Therefore, in our Delta Programme, we try to develop adaptive strategies and use flexible measures in order to make it possible to speed up or slow down when climate change accelerates or keeps the same pace as now.

“In certain countries, people say ‘Let’s wait and see,’ but in our situation we think ‘No, uncertainty is not an excuse for waiting.’ We try to enforce that in our decision making.”