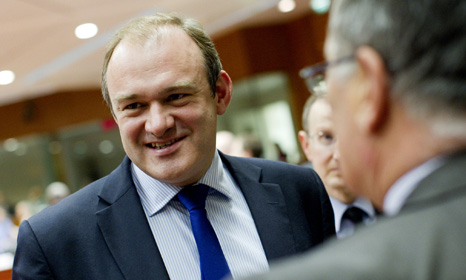 The 15-strong Green Growth Group including France, Germany, UK, Italy and Denmark said the EU should move quickly to agree an emissions reduction target of “at least” 40%.

The countries also called for a 27% EU-wide renewables target provided it is non-binding at national level, and said further energy efficiency options should be explored later in 2014.

In a statement sent to RTCC, UK energy and climate chief Ed Davey said the flexibility of a clean energy goal would ensure countries could decarbonise in a cost-effective way.

“We continue the push for our EU partners to sign up to the UK position of a 40% reduction in domestic greenhouse gas emissions,” he said.

“We call for urgent action on reaching an ambitious 2030 energy and climate change agreement, to spur on investment in green, reliable energy and build momentum for a global climate deal.”

Talks to develop a 2030 climate and energy strategy have exposed deep divisions in the EU over how far and how fast it should go in decarbonising.

Poland, Hungary, Bulgaria and Romania appear uneasy about committing to tougher targets, while it is unclear where Austria, Greece, Latvia or Croatia stand.

Strong message to the March #EUCO from the ENVI Council on the 2030 package:overall positive reception of 40% and ETS reform. Encouraging!

After attending the meeting today, Julia Michalak, climate policy officer at CAN Europe, told RTCC: “It’s clear there are many countries calling for a decision to be made at the March Council and it seems to be very important that the decision won’t be delayed.”