Merkel: UK and Germany have “common ground” on climate strategy 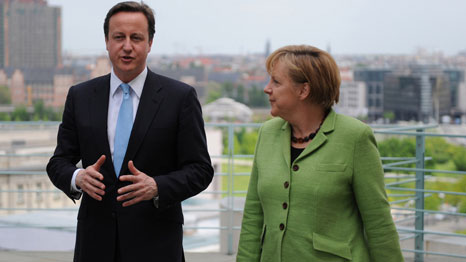 The UK and Germany stand on “common ground” in the EU discussions on how to tackle climate change up to 2030, said German Chancellor Angela Merkel during a state visit yesterday.

The European Council is set to meet in March. Speaking to reporters during a high profile visit to the UK, Merkel said that “climate and energy will loom large on that agenda.”

Councillors will discuss a proposal put forward by the European Commission in March to reduce Europe’s greenhouse gas emissions 40% by 2030.

Green groups have called for the package to be strengthened. They suggest the current recommendations will not keep the EU on a pathway to keep global warming below an internationally agreed target of 2C, and send out only weak reassurances to low carbon industries.

During the negotiations, the UK stood alone in pushing for a higher 50% greenhouse gas reduction target, although only in the case of an international deal by the UN. In Germany’s Coalition Agreement, the government supports a target of “at least” 40%.

Merkel said that in the March Council climate discussions that there will be “a lot of common ground…between Britain and Germany.”

Polling undertaken between 14-15 February by campaign group Avaaz suggests that 83% of Germans would support Merkel in echoing the UK’s calls for a 50% target, while 90% would like her to take European leadership for other countries to follow.

Alex Wilks, campaign director at Avaaz, expressed disappointment at Merkel’s discussions with Cameron, where he said her “warm words” had not led to any scaling up of action.

“She now only has weeks to salvage her climate leadership in time for next month’s EU Council.”