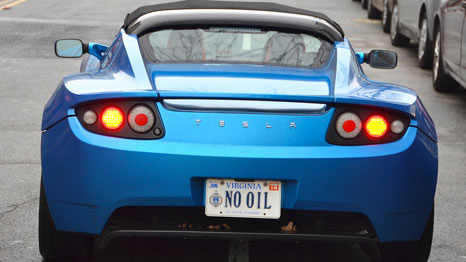 Tesla has proposed building a new “Gigafactory” for batteries – a mammoth $5 billion undertaking that will be vital to the future of the luxury electric car company.

The factory is a grand solution to a problem that the company’s chief executive Elon Musk acknowledged last year at an event last July in California: a shortage of batteries.

“Our issues right now are actually not so much demand generation as they are production related,” he said at Teslive, an exhibition for Tesla owners.

“In order for production to grow, we have to have the whole supply chain move in cadence. One of the bigger challenges for us is going to be lithium-ion cell production. We need a lot of batteries.”

The Gigafactory will allow Tesla to achieve economies of scale, said the company, driving down costs by 30%, helping them to achieve the goal of producing 500,000 vehicles a year by 2020 – almost 15 times its current output.

The company has previously outlined plans to start rolling out mass market vehicles retailing at around $35,000 from 2017.

This forecast boom in production has provided an opportunity to “leverage our projected demand for lithium ion batteries to reduce their cost faster than previously thought possible” they said in a statement.

Colin Brown, the Engineering Director at the Institute of Mechanical Engineers, told RTCC that the new factory could be “highly significant” for the electric car industry, which is still young. According to the IEA, there were around 180,000 electric vehicles on the market in 2012, representing 0.02% of the global stock.

“It’s about scaling up,” said Brown. “These things are all too expensive and don’t perform well at the moment, and that’s because they’re on such small scale.”

So anything that helps Tesla on its way to producing 500,000 EVs a year is good news for the fight against climate change, said Dr Jill Cainey, an electricity storage consultant at Swanburton.

The $5 billion project means that, as well as enabling the company to become a mass producer of electric cars, it could make Tesla a major player in the field of electricity storage.

Tesla’s shares surged to a record high after Morgan Stanley analyst Adam Jonas told investors that more than doubled its target price for the company from $157 to $320 as a result of the new factory.

He wrote to clients suggesting that the company’s foray into battery production meant that it could end up staking out a claim in the trillion dollar electric utility industry: one of the difficulties of renewable energy generation is how to store the intermittent supply to ensure a constant flow when needed. Batteries provide a solution to this problem.

“If it can be a leader in commercializing battery packs, investors may never look at Tesla the same way again,” wrote Jonas.

Cainey said it was possible that the batteries could have a more immediate impact, as they could have a “second life” in energy distribution systems once they became unsuitable for use in cars, although she added that the technology was still in its infancy.

“This has a huge impact beyond Tesla,” Harley Shaiken, a labour economist at the University of California, Berkeley, told Bloomberg. “It gives enormous legitimacy to battery production and the future of the electric car because that lies in the battery. It’s high stakes, high technology.”

A graphic of the proposed site released by the company shows the building sitting alongside new wind and solar plants. The total construction will take up between 500-1000 acres of land, and will employ 6,500 people.

This means it would become a major industry, though Tesla has yet to announce where it will take root. Current finalists in the competition to host the new Gigafactory are Texas, Arizona, Nevada and New Mexico.

Brown said: “The whole eco-agenda, the whole electric transport agenda, needs courageous players, and Tesla is to be applauded for the fact that it’s showing leadership like this.”