A powerful new tool to map the world’s forests could help government and business crack down on illegal logging.

Global Forest Watch is a new interactive map which tracks real time changes in the world’s forest cover, allowing users to see where and when trees are being cut down.

The maps lay these images on top of information on protected areas, biodiversity, logging, mining and palm oil plantations, to provide a global picture of the state of the world’s forests – and who is responsible for their destruction.

It also shows which companies are responsible for the areas of forest that have been granted for commercial use by the government, making it easy to see who is infringing upon protected land.

“For major purchasers of products and commodities such as palm oil, until now the intention has been honourable but it’s difficult to know who’s doing what,” said Andrew Steer, director of the World Resources Institute, which led work on the map alongside partners including Google, Nasa and UNEP. 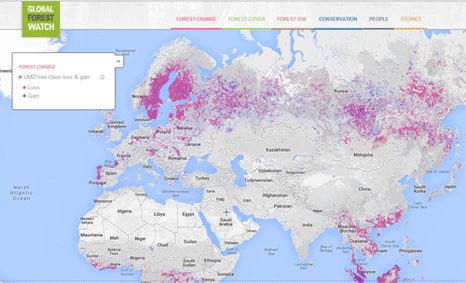 Deforestation is a powerful driver of climate change. Forests are a valuable carbon sink, and their destruction accounts for almost 20% of global emissions. Appromixately 13 million hectares of forests are destroyed each year.

According to the World Bank, up to 90% of logging is illegal in some countries, and generates about US$10–15 billion annually in criminal proceeds, which is used to pay corrupt government officials.

The UN has made the conservation of forests a priority, and has initiated a scheme called REDD+, which sees developing countries paid for their preservation.

This is the first time that the expansive data on the world’s forests has been combined in one map. It is accompanied by crowdsourced information, providing an on-the-ground network to verify the data gathered by satellites.

Duncan Pollard, head of stakeholder engagement in sustainability at Nestle, said that the tool would help the company to hold their supply chain to account. Nestle made a commitment in 2010 to ensure none of their products caused deforestation. “It’s going to change the way we do business,” he said.

Rebecca Moore, a computer scientist at Google, who helped develop the map, says that while there are “terabytes of data” in the form of satellite images of the world’s forests, this has so far been difficult for governments and corporates to access and understand.

“The key challenge has been to manage the enormous scale of the data to map, to measure and to monitor forests globally at the necessary level of detail to really support use of that information,” she said.

She described the technology that has allowed Google to develop the map as “turbo powered science”, completing in days the analysis that it would take a single computer 15 years to perform.

Nigel Sizer, who is director of the Global Forests Initiative at the World Resources Institute, says that the new mapping tool presents the information in a way so that it is transparent and easy for everybody to use “whether you’re a business, government or NGO or a researcher.”

While companies such as Nestle and Kellogg have promised to tackle the problem, ensuring the integrity of the supply chain can be difficult, as products are sourced from around the world.

Pollard said that the map is “going to help our suppliers demonstrate they are free of deforestation, and it’s going to help us to monitor and report on the progress we make on our global commitment.”

Over 2300 academic, governmental and charitable institutions have already requested access to the data underpinning the maps, says Moore, showing that there is a “real hunger for this type of information”.