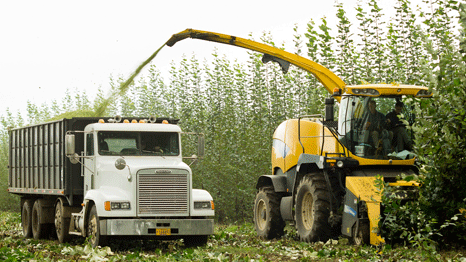 The UK is wasting an opportunity to generate almost half of its energy from biomass, according to a new report from the Tyndall Centre for Climate Change Research.

By 2050, up to 44% of the UK’s energy could be produced from household and agricultural waste and home-grown fuels, says a study published today in the Energy Policy journal.

Biomass currently provides 38% of the UK’s renewable energy, although this only contributes about 15% to the country’s overall energy production.

It is classed as a ‘renewable’ form of energy since the plants and trees used can be regrown, sucking in carbon dioxide as they grow.

The potential of biomass could help to wean the UK off fossil fuels, says Andrew Welfle, the author of the study. “The UK has legally binding renewable energy and greenhouse gas reduction targets, and energy from biomass is anticipated to make major contributions to these,” he said.

The UK is legally bound to reduce its energy-related carbon emissions by 50% on 1990 levels by 2027 – an ambitious target that will require the fossil fuel industry to give way to cleaner technologies, which could include biomass.

He found that residue from agriculture, forestry and industry could potentially provide 6.5% of primary energy demands by 2050, along with 15.4% from waste resources and 22% from specifically grown biomass and energy crops.

But there are a number of obstacles associated with biofuels and biomass. These including the concern that it could compete for land that could be used to grow food, and that large volumes of biomass would have to be imported for it to produce significant volumes to energy.

A 2012 report from the RSPB said in some cases biomass is dirtier than coal, revealing that emissions from burning wood over a 20-year period could be 80% greater than coal.

Welfle says the real potential lies in forms of biomass currently classed as waste. “Our research has found that the UK could produce large levels of energy from biomass without importing resources or negatively impacting the UK’s ability to feed itself,” he said.

“The research highlights that both household and food/plant waste streams represent particular potential for the sector.”