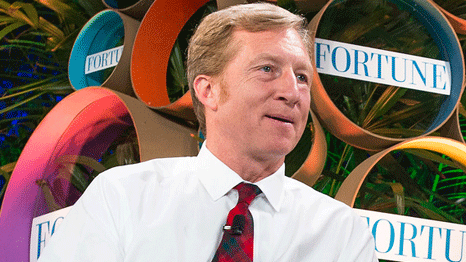 American billionaire and philanthropist Tom Steyer plans to spend US$100 million to push climate change higher up the political agenda.

During the 2014 midterm elections, the Democrat supporter intends to use $50 million of his personal fortune to exert pressure on politicians to act on climate change with the hope the sum will be matched by other private donors.

The New York Times reports Steyer will use his San Francisco-based organisation NextGen Climate to fund ad campaigns to unseat or block pro-coal and climate sceptic lawmakers from power.

Steyer told the newspaper he hopes the investment will have a long lasting impact.

“Our feeling on 2014 is, we want to do things that are both substantively important and will have legs after that,” he said. “We don’t want to go someplace, win and move on.”

One of Steyer’s specific targets includes the governor’s race in Florida, where he hopes to oust the current leader Rick Scott, a Republican who has dismissed manmade climate change.

He is also turning his attention to the Senate race in Iowa, hoping to secure a win for Democratic candidate Bruce Braley, who supports of measures to curb greenhouse gas emissions.

Steyer retired in 2012, accumulating a personal fortune of $1.5 billion through his hedge fund Farallon Capital Management.

He is also a strong opponent of the Keystone XL Pipeline – a controversial project that will pump highly polluting oil from Canada’s tar sands to Gulf Coast refineries.

Ahead of November’s midterm elections, Steyer said Democrats need to stay in control of the Senate for “as long as we have this partisan divide on energy and climate.”

But his support is not exclusively partisan, and he has already campaigned to remove Democrat Senator Mary Landrieu of Louisiana, who  favours the Keystone XL pipeline and has close ties to the oil and gas industry.

“If it makes them nervous, tough,” he told US blog The Hill.

The US, the world’s largest economy and the second-biggest emitter of greenhouse gases, has come under strong pressure at international climate negotiations to make big cuts in carbon.