Activists delivered roses and cards to Australian MPs this morning, asking them to “be the one” for climate action 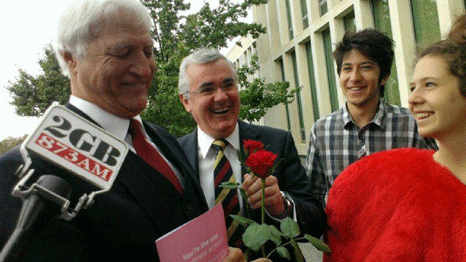 Environmentalists delivered roses and Valentine’s Day cards to the Australian Parliament today, hoping that a show of affection might dissuade politicians from repealing the country’s carbon tax.

Members of the Australian Youth Climate Coalition (AYCC) gathered at Parliament House this morning to hand out global warming themed cards, asking them to “be the one” for climate action. They were accompanied by two violin players and a giant heart.

The activists were responding to an announcement by the Australian government last week that it hopes to repeal the carbon tax by July – a move that many see as a backwards step on tackling climate change, as it would remove the financial disincentive to pollute.

“The Government says it’s serious about climate change – yet within a few hours of Parliament’s first sitting day for 2014 it was trying once more to repeal our cap on carbon pollution,” said AYCC National Co-Director Lucy Manne.

“As young people, we’re reminding our politicians this Valentine’s Day that climate policy and romance have something in common: it’s not just the thought that counts – it’s real action.”

Tony Abbott’s Coalition party hopes to replace the carbon price with a ‘Direct Action Plan’, which would instead provide financial incentives for country’s main polluters to reduce their emissions.

But this has been beset by controversy, with questions over whether the plan is capable of reaching the 5% emissions reductions that Australia is bound to under an international treaty. Tony Abbott has said that he will not increase funding for the plan should it be found there is a shortfall.

The cards given to MPs by the activists say that Australia needs to move beyond fossil fuels and transition to 100% renewables within a decade to ensure the world does not pass the threshold into dangerous levels of warming.

But government frontbencher Christopher Pyne said that it would take more than a Valentine’s Day card to make him change his mind.

Independent MP Andrew Wilkie was more easily pleased. “This might be the only Valentine’s Day card I get today,” he said.