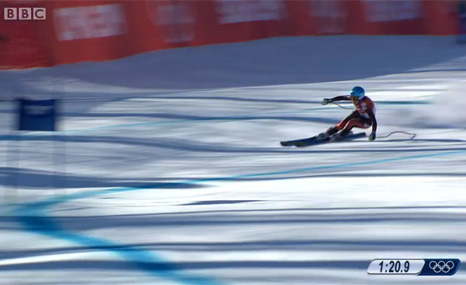 Over 100 Olympic athletes have signed a letter to world leaders calling for action on climate change, which they say threatens the world of winter sports.

Competing athletes have written to politicians signalling their concern over global warming and highlighting the importance of signing an international climate change treaty at a UN meeting scheduled for 2015 in Paris.

They have told world leaders to “Recognize climate change by reducing emissions, embracing clean energy and preparing a commitment to a global agreement at the UN Framework Convention on Climate Change in Paris 2015.”

The letter has been signed by 105 athletes who are taking part in the games, representing countries including the US, Switzerland, Norway, Estonia, Canada, Australia, Germany, France, Italy and Sweden.

Andrew Newell, who is representing the US ski team for the third time this year, says the the changes that have taken place since he first started skiing as a two-year-old have led to a “heightened awareness of climate change”.

He writes: “What has changed since that day in 1985 when I first experienced that thrill and came to love this sport?

“Thankfully, much is the same, but there is no escaping the fact that the once-consistent winters that I saw as a young kid are no more, especially near my home in Vermont…Our climate is changing, and we are losing our winters.”

The Games got underway in Sochi last week, amid concerns over lack of snow and tropical temperatures.

The summertime temperatures in Sochi, a city on the Black Sea Coast in Russia, have caused lively discussions of the impact that climate change could have on the future of the Winter Olympics.

On Monday, the temperature hit 16C, and is forecast to rise by the end of the week. The subtropical climate along the resort has led to extensive plans by the Russians to ensure that there is sufficient snow throughout the games, including 710,000 cubic metres of snow that has been stockpiled over the past two years.

“These measures will mean that snow is guaranteed, whatever the weather,” said a Sochi spokesperson. Yesterday, officials at the games confirmed that they had started shovelling this snow onto the racing venues.

But athletes say they are already feeling the pressure of the slushy snow. “It was pretty warm snow and I don’t think I adapted to it well,” American skier Stacey Cook told AP. “It slides under your ski more.”

Meanwhile, the first of three jumps at the RusSki Gorki Jumping Center were cancelled after the hot weather softened the snow in the landing area.

A recent study by researchers from Canada and Austria found that, under the IPCC’s high emissions scenario, only six of the 19 cities that have hosted the Winter Olympics in the past could be relied upon to receive enough snow to make them suitable venues for the winter games in the 2080s – and Sochi is not one. 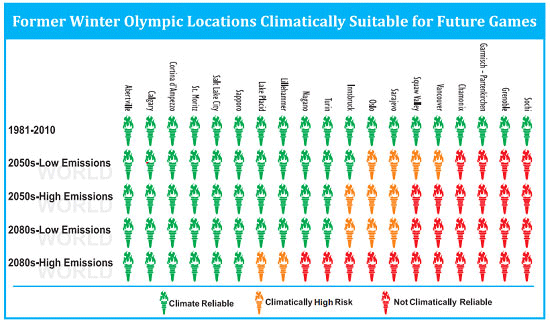 Even with the most conservative assumptions, only ten of the past cities could conceivably host the Winter Olympics in 60 years’ time.

“The cultural legacy of the world’s celebration of winter sport is increasingly at risk,” said Professor Daniel Scott, lead author of the study. “Fewer and fewer traditional winter sports regions will be able to host a Olympic Winter Games in a warmer world.”

According to Andrew Newell, individual actions are not enough to reverse the trend of climate change.

“Where is the big legislation that can implement the real change we need?” he says. Like the Olympics themselves, he says that next year’s conference in Paris is a chance for leaders to put politics and religion aside, and come together to take meaningful action.

At this UN meeting, world leaders have agreed that they will sign a treaty to reduce global emissions in an attempt to keep the world below the dangerous levels of warming that would be calamitous not only for winter sport, but for food, water, security and the health of the planet.

“Previous climate conferences have ended with nothing to show for it, but Paris needs to be different,” he says.

“We can’t risk inaction any longer, and we’re asking our world leaders to come together in the spirit of something bigger than just our individual goals.”