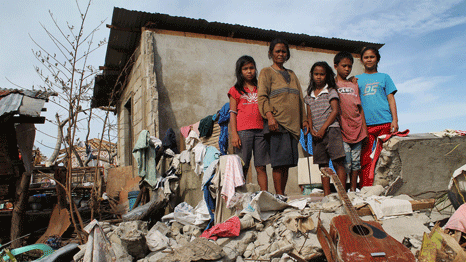 Devastated communities in the Philippines are returning to dangerous areas due to a lack of help in finding new accomodation, say aid workers in the islands.

They warn rebuilding efforts have failed to meet the challenges of a future of extreme weather events, meaning vulnerable parts of the country face greater damage in the forthcoming typhoon season.

Overall, only 52% of the funding required in the Philippines has been met, despite a huge international effort from the UN, individual countries and charitable organisations to pool donations.

Justin Byworth, the head of World Vision UK, who has been working in the Philippines, warned of thousands of people still “living in limbo”, with residents rebuilding their homes in zones that the government has deemed unsafe due to their proximity to the sea.

After visiting Tacloban this week, one of the most severely damaged areas, Byworth said: “I met many families rebuilding their homes in government-imposed ‘no build zones’ near the coast, and we’re concerned that they’ll have to move on yet again … many houses are being ‘built back worse’ and will not be able to withstand future storms.”

There has been a particular lack of funding for the provision of the tools and materials that would allow people to rebuild their homes, with only 20% of the necessary finance secured so far, according the UN’s Office for the Coordination of Humanitarian Affairs.

100 days after #Haiyan, the Philippines says “thank you” for the massive outpouring of international help #PHthankyou pic.twitter.com/roYeHgX4BW

Typhoon Haiyan, which hit the Philippines in November 2013, just as the UN’s annual climate change conference got underway, has affected 14.1 million people and completely destroyed 548,793 houses.

“In the initial phase, you get the most funding and people were extremely generous, but it has trailed off now. Unfortunately in many of these cases the need always outweighs the funding,” said Cecil Laguardia, the Typhoon Haiyan spokesperson for World Vision.

Local media in the Philippines has also reported community opposition to the government’s plans to relocate vulnerable areas.

Earlier this week, a group of around 100 fisherman staged a protest over the ‘no build’ policy imposed in coastal areas in Tacloban City and the rest of Eastern Visayas, where Haiyan called severe damage, saying that it would deprive them of their right to a livelihood.

According to World Vision, the scale of the destruction has left people with little choice but to build back in the areas of land deemed unsuitable by the government.

“People have no choice at this point because the evacuation centres are full and some of those centres are schools and they have reopened for classes, and the relocation is going to be in batches, starting with those that live in the ‘no build’ zone,” said Laguardia.

“Sites are being prepared and the majority will move into those relocation sites, but that takes time and it takes money, and there’s not enough of either.”

Lack of money to help developing countries like the Philippines adapt and respond to climate change related disasters has been a point of controversy at the UN’s climate talks over the years, with negotiators accusing the developed world of being slow to fulfil former promises of finance.

It is a problem that goes beyond the Philippines. The Green Climate Fund, through which developed countries have promised to provide US$ 100billion a year from 2020, has so far received minimal financial pledges, and it is unclear how money will be channelled towards climate-related impacts over the coming six years.

“The challenge is to be able to find solutions with a relatively static pot of resources and to be able to creatively deal with these fast changing situations,” said Lory Tan, vice president of WWF Philippines. “I don’t think even the UN or the Global Environment Facility are able to replenish the funds they’re looking for.”

He added that the storm had already damaged the economy of the Philippines, including some of the large businesses which had provided jobs. Both the Coca-Cola and San Miguel beer factories were damaged by the typhoon, and have now been told that their old locations are on ‘no build’ zones, he said.

Last November, the UN agreed to set up a system that would help countries to deal with the impacts of climate change that are now considered inevitable, due to the large volumes of carbon dioxide already in the atmosphere. As well as potentially becoming another platform for the provision of funds, this so-called ‘loss and damage’ mechanism would set up task forces to investigate how to best to deal with climate-related disasters.

Tan said that part of the problem in the efforts to rebuild lives in the Philippines was the lack of accurate information reaching potential donors on what the real need is in the country, and that there needed to be a greater effort to ensure that there were networks of locally based crisis mappers who could continue to provide this once the UN workers left.

According to the latest UN climate science report, extreme weather events are expected to increase as the planet heats up.

Rising sea levels will cause storm surges, like those that caused the extreme damage to lives and property after Typhoon Haiyan, to become more severe.

The World Meteorological Organisation says that while no single weather event can be attributed to climate change, it was responsible for the particular severity of the event.

“The problem we face has to do with the variability that is a basic characteristic of climate change. Whatever area is hit this year may not be hit next year,” said Tan, highlighting the difficulty of preparing the Philippines for the coming typhoon season.

“The grand scheme is to have very flexible institutions and plans that allow cities to not only withstand severe shocks but have designs that cushion the impacts of shocks.

“I don’t think there are many countries in the developing world that have systems in place that provide a sufficient level of flexibility needed to deal with a highly variable future, certainly with climate patterns that change from year to year.”