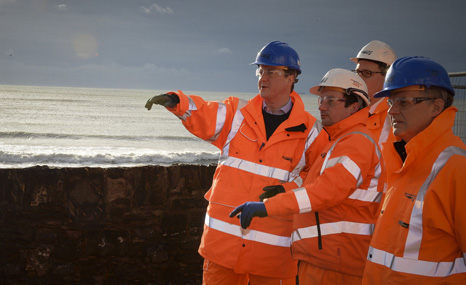 UK’s Prime Minister David Cameron has said that climate change is a serious threat after he visited to areas badly affected by floods and tidal surges, adding that more needs to be done to protect the country from extreme weather.

Cameron was responding to questions about the views of some senior figures in his Conservative Party who have discounted the link between extreme weather, climate change and greenhouse gas emissions.

“Whatever your view about climate change, it makes sense to mitigate and that is the view of the whole government,” Cameron told a press conference.

The UK has endured some of its worst flooding in decades following two months of record rainfall which has inundated thousands of homes in southern counties and cut off rail links.

Owen Paterson, who heads the government ministry in charge of flood defences, has come under particular criticism for his longstanding view that extreme weather isn’t linked to manmade climate change, a view shared by others on the right wing of his party.

Cameron said money would be “no object” to compensate for the damage caused by heavy rain and coastal storms, adding that the government would “spend what is necessary for the future”.

“We’re going to lay out plans and spend what we need to…We will deal with the floods and we will build a more resilient country for the future,” he told journalists.

A report published today by Deloitte, a consultancy, said the damage caused by Britain’s wild weather this winter could cost 1 billion pounds.

At the weekend, the UK’s Meteological Office said the extreme weather seen in recent months was likely to be the result of climate change, although some scientists say that establishing a with global warming is premature.

“Nobody has come forward to counter the basic premise that if you have a warmer world you are going to get more intense heavy rain rates,” the Met Office aid.