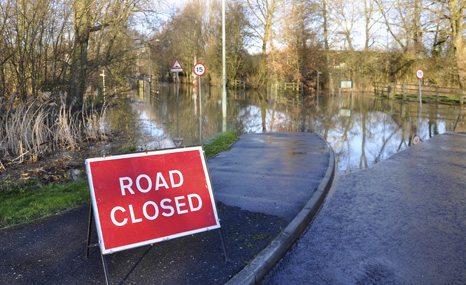 The British Government’s main climate science adviser, the UK Met Office, says the present exceptionally wet and stormy winter “could be a manifestation of climate change.”

Its chief scientist, Dame Julia Slingo, says the variable UK climate means there is “no definitive answer” to what is producing this winter weather, with the “most exceptional period of rainfall in 248 years”. But “all the evidence suggests there is a link to climate change”.

She said there was no evidence to counter what the basic science says will happen as the world warms – that heavy, fierce downpours of rain will occur more often.

“Nobody has come forward to counter the basic premise that if you have a warmer world you are going to get more intense heavy rain rates…as we’re beginning to detect now over the UK.”

The Met Office, with the UK’s Centre for Ecology & Hydrology (CEH), has published a report, The recent storms and floods in the UK, which strikes a cautious note.

It concludes: “It is not possible, yet, to give a definitive answer on whether climate change has been a contributor or not” to the frequent and torrential rain, storms and floods affecting much of the UK since early December.

But deep in the detail of the report’s findings are clear statements by its authors showing they are convinced that climate change may be partly responsible, despite the well-known fickle nature of the British weather.

The report says, for example, that although the number of strong winter storms over the mid-latitude North Atlantic – the path of the current storms – has not increased since 1871, the storms’ average intensity has grown significantly. The continual run of deep depressions through December, January and into February is also unusual.

“This is a critical question because it raises the possibility that disruption of our usual weather patterns may be how climate change may manifest itself.”

The report says there is now some emerging evidence that, over the United Kingdom, daily heavy rain events may be more frequent: “What in the 1960s and 1970s might have been a 1 in 125 day event is now more likely to be a 1 in 85 day event.”

It says there is an increasing body of evidence that shows that extreme daily rainfall rates are becoming more intense, and that the rate of increase is consistent with what is expected from fundamental physics.