Presidents of France and USA issue statement ahead of summit to discuss economy, security and global warming 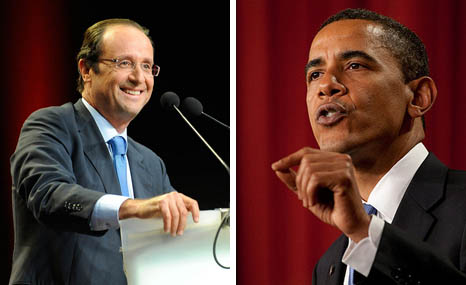 US President Barack Obama and France President Francois Hollande have issued a joint declaration committing to an ambitious global agreement on climate change.

In an article published in the Washington Post and Le Monde, the pair say they will work closely to build the foundations for a deal set to be signed at a UN meeting in 2015.

“As we work toward next year’s climate conference in Paris, we continue to urge all nations to join us in pursuit of an ambitious and inclusive global agreement that reduces greenhouse gas emissions through concrete actions,” they write.

“The climate summit organized by the U.N. secretary general this September will give us the opportunity to reaffirm our ambitions for the climate conference in Paris.”

President Hollande flies to Washington this week for a summit where climate change is expected to be high on the agenda, together with the deteriorating security situation in Syria and the world economy.

Deep US involvement in efforts to develop a global emissions reduction treaty is deemed essential, given the country is the world’s second largest source of greenhouse gases after China.

UN negotiators will gather in Bonn next month to start developing a draft text that will form the basis of any agreement. It is expected to be presented to national delegations at a December meeting in Peru.

Citing the role of green industries in driving growth, Hollande and Obama also say they “can do more” to help developing countries build low carbon energy systems and adapt to changing weather conditions.

“The challenges of our time cannot be wished away. The opportunities of our interconnected world will not simply fall into our laps. The future we seek, as always, must be earned.

“For more than two centuries, our two peoples have stood together for our mutual freedom. Now we are meeting our responsibilities not just to each other — but to a world that is more secure because our enduring alliance is being made new again.”